The conference was rapid-fire.

"Let me just tell you something about what it means to me," said Steve Gaddis, a Langley newcomer who heads the office. "This is two years of formulation, sweat, digging in the trenches to get a Game-Changing program going. We're finally able to kick it off." 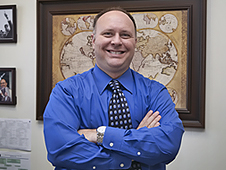 "I'm reminded of the old Pinocchio story: We're a real boy!" he said. "We're not an (operations) plan change. We're a fully funded element in the Congressional budget."

That FY 2011 budget allocated about $350 million in startup money for the office of Space Technology, the parent of the Game Changing Development Program and nine other program offices around NASA. The FY 2012 budget, submitted by President Obama, lifted that to $1,024,000, though that is far from complete.

"On Monday, (the Office of Management of the Budget) came out with a statement that listed four priorities for NASA, and Space Technology was one of those priorities," said Mike Gazarik, a former NASA Langley engineer who heads Space Technology for the agency. He was on hand Wednesday to celebrate opening of the Game Changing Technology office.

"What we need now is an appropriated budget," Gazarik said. "Both the House and Senate have agreed with the program, that in FY '12 we should make a separate account for it. They just haven't agreed with the amount."

For now, 904 jobs throughout the agency are supported by Space Technology. Langley has 152 of those jobs, more than any other center.

Their jobs at Langley involve advancing the development of technology from across the agency with a look toward the future.

"With Game-Changing, we're supposed to be looking at a two-year process of getting the (Technology Readiness Level) from three to about five (on a scale of 1-9)," Gaddis said. "And we want somebody to touch it. We don't just want somebody to develop it and put it on the shelf. We want somebody to use it."

He pointed to the Cryogenic Composite Tank.

"It cuts down the weight of tanks by 50 percent," Gaddis said. "Right now, we're doing a small, 3.5-meter demonstration, and if we can demonstrate it successfully, then I think Space Launch System will take it on and use it (for upper stage cryogenic fuels)."

The job is a departure from most of Gaddis' career, which was spent in human space flight. Programs in that realm tend to think in terms of systems. Space Technology is more concerned with pieces of systems.

"We're assessing complicated systems," Gaddis said. "What are the critical components that, if we matured that component, it would change the game for those guys: reduce the cost, increase the efficiency, lower the weight, expand the capability? That's the kind of assessment we've been doing.

"A system is nothing but pieces coming together. So now, we're making the pieces better."

He has caught the technology fever.

"I'm not a true blue technologist but, man, they've got me fired up about it," he said. "A lot of what we used in human spaceflight wasn't cutting edge. This is cutting edge, man.

"This is going for something that worked on a lab table to take it to a ground demonstration and make it ready for a flight demonstration. It's very exciting. I'm passionate about it. You can't hang around these technologists without feeling their passion."

When NASA Space Technology program was conceived two years ago, among its first components was going to be Game Changing Technology. Bobby Braun, the former agency chief technologist, and Gazarik traveled the country to explain the concept.

"It was going to be a group that was like DARPA (Defense Advanced Research Projects Agency)," Gaddis said. "It could quickly do things, quickly assess things. Failure – we would learn from it."

"Two years ago, it was just talk," Gaddis said. "Now it's a full-fledged program."

With an office in NASA Langley's hangar that is open for business.