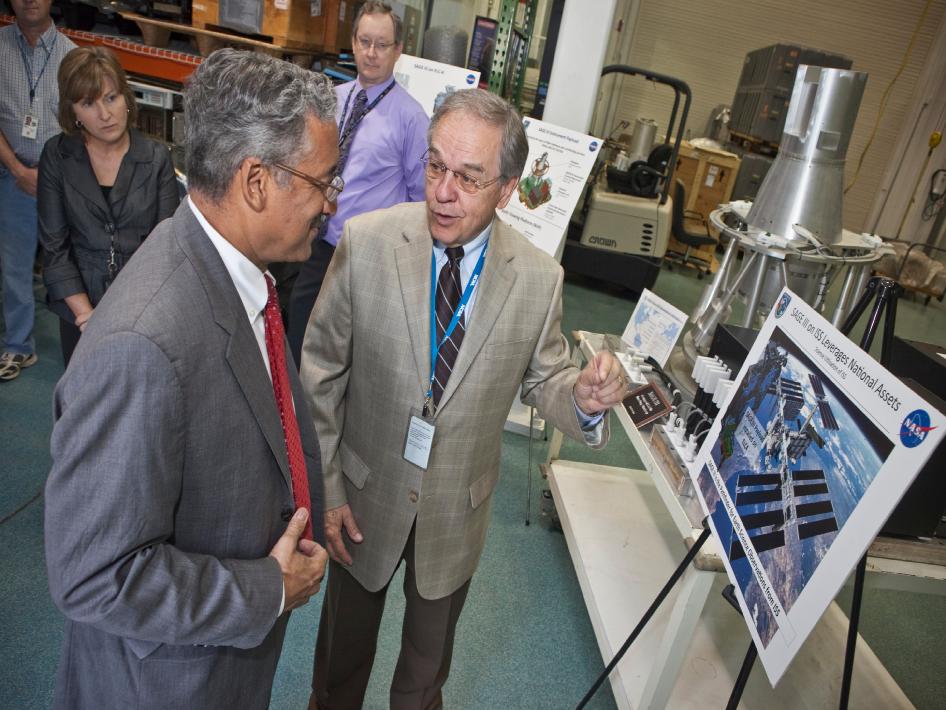 The SAGE III on ISS team welcomed Rep. Robert "Bobby" C. Scott (D – VA) to NASA Langley on May 18. During his visit, the team showed off a full-scale mockup of SAGE III on ISS – a space-based instrument with a mission to track the changes in our ozone layer and see what other gases and particles might also be present.

The SAGE III mockup is seen in this photo of Rep. Scott speaking with Dr. Patrick McCormick from Hampton Univ. (front left and right respectively), Dr. Joe Zawodny (back right) from NASA Langley and Center Director Lesa Roe (back left). The team then invited Rep. Scott and his aide, Scott George, to go into the clean room to see the actual SAGE III instrument as it is being prepared for space flight.

The SAGE III instrument is used to study ozone, a gas found in the upper atmosphere that acts as Earth’s sunscreen. More than 25 years ago, scientists realized there was a problem with Earth’s thin, protective coat of ozone...it was thinning. The SAGE family of instruments was pivotal in making accurate measurements of the amount of ozone loss in Earth's atmosphere. SAGE has also played a key role in measuring the onset of ozone recovery resulting from the internationally mandated policy changes that regulated chlorine-containing chemicals, the Montreal Protocol, which was passed in 1987.

Today, the SAGE technique is still the best for the job, and NASA scientists are preparing to send the third generation of the instrument into space. However, not just any spacecraft will do for SAGE III. Scientists have been keeping it safe, waiting for the day that it could go where no continuous Earth-observing instrument has gone before – the International Space Station (ISS).

Instead of flying on an un-manned satellite, SAGE III will be mounted to the ISS where it will operate alongside experiments from all over the world in the space-based laboratory. The orbital path of ISS will help maximize the scientific value of SAGE-III observations while proving that atmospheric science instruments do have a place on the space station.

SAGE III is scheduled to board one of NASA's first commercial Space X flights in 2014 for a ride to its new home. Once on ISS, SAGE III will do what it does best – Earth observations to extend a long record of atmospheric measurements for the continued health of Earth and its inhabitants.