The star-powered duo came together at Williams Farm Park in Virginia Beach, Va. on April 23, to kick-off a partnership between NASA and Williams' Foundation, From One Hand to Another (FOHTA). Their joint mission is to inspire and educate students about STEM (science, technology, engineering and math).

In two single-file lines that formed a path, the rhythms of the New Generation Drum Corps began, as drum majors, flag corps, dancers and majorettes performed. 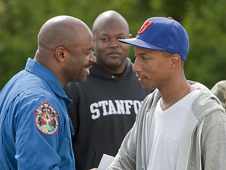 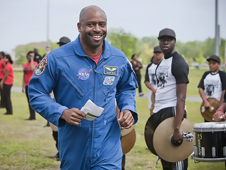 Former Astronaut Leland Melvin runs through a path formed by the New Generation Band as he heads onto the stage. Credit: NASA/Sean Smith 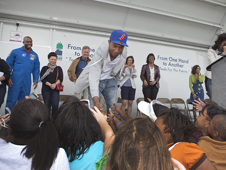 Pharrell Williams, three-time Grammy Award-winning producer from Virginia Beach, Va. reaches out to local students at Williams Farm Park, the site for his first Resource Center, which is supported by his foundation, From One Hand to Another (FOHTA). Credit: NASA/Sean Smith 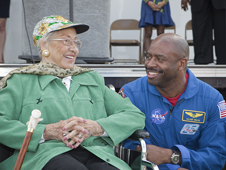 First down the path and onto the stage was Melvin.

"You can do anything you put your mind to," he said.

"Do you believe that?" he asked the more than 1,000 local students, including many that participated in NASA Langley Research Center’s inaugural Summer of Innovation (SoI) camps, a multi-faceted, intensive middle school STEM project.

"Yes!" the students shouted from the crowd.

"How many dreamers are out there?" Melvin asked as the student’s arms rose into the air. "Your dreams can be achieved. It takes action. [It] takes hard work. It takes dedication and it takes belief in yourself."

Next, Williams exited from between the beats and he stepped to the stage as the crowd stood to their feet.

"Anything is possible -- including going beyond this planet, out to space. I don’t know if you guys are really digesting and grasping where this guy has been," Williams said as he gestured towards Melvin. "This guy has been beyond our atmosphere, and that, to me, means that if it is possible to travel beyond our stratosphere and to see what our world looks like from behind, then you guys [students], especially at the age that you are right now, should know that there is nothing that you cannot do on this planet."

Though Williams and Melvin were quite the draw, it wasn't about them.

It was about 10-year-old Jeffrey, a student at Truitt Intermediate School in Chesapeake, Va. His love of science led him and his parents to the event.

And his curiosity led him to a NASA exhibit that focused on exploration.

"I am not jolly or green, but I am the giant of our solar system’s planets. I am ..." said NASA volunteer Sebrenna Young.

It was also about D.J., a local 4th grader who received a NASA poster to add to his space-themed room, filled with planets and glow-in-the-dark stars.

And for Melvin, Williams, a handful of elected officials and dozens of volunteers, it was about making a lasting impression.

"It's up to you guys," Williams said. "You guys are the future."

Katherine Johnson, a NASA legend and trailblazer, served as an example for the students. She was a "computer" at Langley Research Center "when the computer wore a skirt," said Johnson. Johnson calculated the trajectory of Alan Shepherd's 1961 trip into space, America's first.

Among booths and activities circled throughout the park, students lined up to meet and get autographs from Melvin, Williams and Johnson.

As the event unfolded, music and STEM became an obvious couple. "Science is what makes music instead of noise," Melvin said. Williams' own music rocketed to new heights when Melvin flew his CD aboard one of his missions.

This event is an early glimpse of possibilities for these students and others that will follow. NASA and FOHTA plan a continuing partnership. FOHTA is supporting the development of the Pharrell Williams Resource Center, which is being designed by Chad Oppenheim and is scheduled to open in 2013 at Williams Farm Park. The center will run academic enrichment programs and will continue to engage youth in STEM activities.

Their message of encouragement was heard loud and clear.

"When I heard the astronaut speaking, I felt like I could be an astronaut one day," Jeffrey said.