Development of a low-cost space plane took a step forward last month when one of three technologies essential to its success was declared "ready for flight". 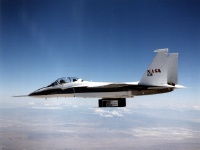 The rugged, metallic thermal-protection panels designed for NASA's X-33 technology demonstrator passed an intensive test series that included sessions in NASA Langley's high-speed, high-temperature wind tunnels. The panels also were strapped to the bottom of a NASA F-15 aircraft and flight-tested at nearly 1.5-times the speed of sound.

Additional laboratory tests duplicated the environment the X-33's outer skin will encounter while flying roughly 60 miles high at more than 13 times the speed of sound. Also, a thermal-panel fit test successfully demonstrated the ease of panel installation and removal. 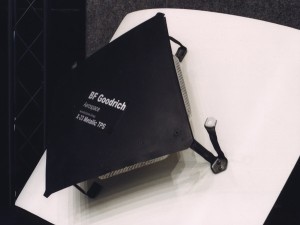 The thermal protection system combines aircraft and space-plane design, using easy-to-maintain metallic panels placed over insulating material. As the X-33 flies through the upper atmosphere, the panels will protect the vehicle from aerodynamic stress and temperatures comparable to those a reusable launch vehicle would encounter while re-entering Earth's atmosphere. Tests have verified that the metallic thermal-protection system will protect vehicles from temperatures near 1,800 degrees Fahrenheit.

"NASA is focusing on creating a next generation of reusable launch vehicles that will dramatically cut the costs associated with getting into space," said Dan Dumbacher, NASA X-33 deputy program manager. "One way to cut costs is to design rugged systems that require less maintenance and that are more airplane-like in their operations." 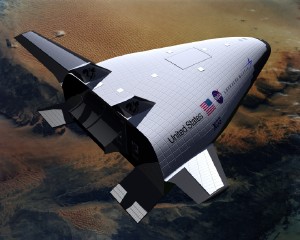 "By developing and proving these systems, we're creating the ability to build space planes that eventually will fly to orbit, return for servicing, and launch again as often as today's commercial airplanes make scheduled flights," he added. Dumbacher is assigned to NASA's Marshall Space Flight Center, Huntsville, Ala., the lead center for developing future space transportation systems.

The remaining two technologies important for low-cost space access are an efficient propulsion system ideally suited to power a lifting body and, more importantly, lightweight-yet-strong composite cryogenic fuel tanks and structures to minimize vehicle weight. Work on those two challenging technologies continues as the X-33 program enters a phase of intense testing and qualification of the vehicle's components.

"The fact that the metallic panels do not require an aeroshell should result in a significant weight saving over the Shuttle system," said Dr. Wayne Sawyer, a senior engineer with NASA Langley Research Center in Hampton, Va. "This system also has significant advantage in that it is much more durable and it doesn't require waterproofing, which is very manpower intensive. Both result in a cost saving," Sawyer added.

The X-33 is a half-scale technology demonstrator of a full-scale, commercially developed reusable launch vehicle (RLV) which Lockheed Martin has named "VentureStar," planned for development after the turn of the century. Through airplane-like operations and a single-stage-to-orbit design, a full-scale RLV could dramatically reduce the cost of putting payloads into space from $10,000 per pound to $1,000 per pound. 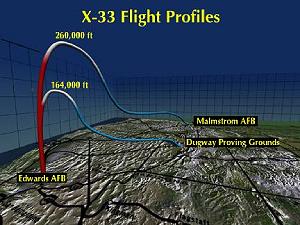 The X-33 is scheduled to make as many as 15 test flights from Edwards Air Force Base, Calif., to Dugway Proving Ground, Utah, and Malmstrom Air Force Base, Mont., beginning in 2000.

Although suborbital, the X-33 will fly high enough and fast enough to encounter conditions similar to those experienced on an orbital flight path to fully prove its systems and performance.

Interviews with NASA Langley scientists are available by calling Ann Gaudreaux at (757) 864-8150.