The distinguished Langley aeronautical researcher John Becker, who was an early advocate of the X-15 program, identified 25 specific accomplishments of the program, including:

(These last few discoveries including the Space Shuttle.)

The experiments included tests of horizon definition and proposed insulation that bore fruit in the navigation equipment and thermal protection used on the Saturn launch vehicles in the Apollo program, which dispatched 12 astronauts to the moon and back. Among the 12 was Neil Armstrong, the first human to step on the moon's surface and a former X-15 pilot. 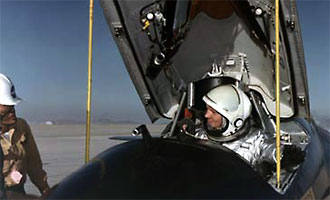 In the area of physiology, researchers learned that the heart rates of X-15 pilots ranged from 145 to 185 beats per minute during flight. This greatly exceeded the normal 70 to 80 beats per minute experienced on test missions for other aircraft. The cause of the difference proved to be the stress X-15 pilots encountered during prelaunch in anticipation of each mission. As it turned out, the higher rates proved typical for the future physiological behavior of pilot-astronauts.

More intangibly but no less importantly, in the words of John Becker, the X-15 project led to "the acquisition of new piloted aerospace flight know how by many teams in government and industry. They had to learn to work together, face up to unprecedented problems, develop solutions, and make this first manned aerospace project work. These teams were important national assets in the ensuing space programs."

As the partial list of accomplishments suggests, the X-15 brilliantly achieved its basic purpose of supporting piloted hypersonic flight within and outside the Earth's atmosphere. In addition, it carried out the "explorations to separate the real from the imagined problems and to make known the overlooked and the unexpected problems."