A North American team designed the aircraft, with technical guidance from the NACA Langley Aeronautical Laboratory (now NASA Langley Research Center), Hampton, Virginia. The basic X-15 was a single-seat, mid-wing monoplane. The X-15 initially flew with two XLR-11 engines, producing a thrust of 16,380 lb. Later, the Thiokol Chemical Corp. throttleable XLR-99 engine was installed. The XLR-99 provided a maximum thrust of 57,000 lb. and a minimum thrust of 28,000 lb. It was fueled by anhydrous ammonia and liquid oxygen. 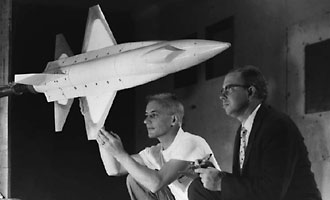 Because the rocket engine consumed large amounts of fuel, the X-15 was air launched from a B-52 research aircraft at about 45,000 feet, flying over 500 mph. Depending on the mission, the rocket engine provided thrust for the first 80 to 120 seconds of flight. The remainder of the normal 8- to 12-minute flight was without rocket engine power and ended in a 200-mph glide landing. Because the nose wheel lacked steering and the main landing gear employed skids, the X-15 landed on a dry lakebed. The Rogers Dry Lake adjacent to Edwards and Dryden was the intended landing location for all flights, but numerous lakebeds were selected in advance for emergency landings.

The X-15 used conventional aerodynamic controls for flight in the dense air of the usable atmosphere. Rudder surfaces on the vertical stabilizers controlled yaw (i.e., movement of the nose left or right) and canted horizontal surfaces on the tail controlled pitch (i.e., nose up and down) when moving in synchronization or roll when moved differentially.

For flight in the thin air outside the Earth's atmosphere, the X-15 used a reaction control system. Hydrogen peroxide thrust rockets on the nose of the aircraft provided pitch and yaw control. Those on the wings furnished roll control.

The outer skin of the X-15 was a nickel-chrome alloy called Inconel X, employed in a heat sink structure to withstand the results of aerodynamic heating when the aircraft was flying within the atmosphere. The cabin was made of aluminum and was isolated from the outer structure to keep it cool.