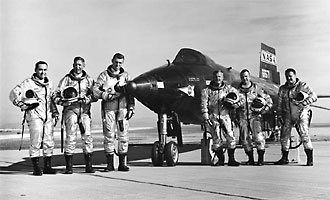 Image above: Six of the twelve X-15 pilots pose with one of the aircraft. Credit: NASA

There were 12 pilots for the program: five from NASA, five from the Air Force, one from the Navy, and one from North American. Generally, pilots used one of two flight profiles -- a speed profile that maintained a level altitude until time for descent to a landing or a high-altitude flight plan that maintained a steep rate of climb until reaching altitude and then descending. The X-15 pilots in order of date of first flight and number of flights were:

The X-15 had its share of emergency landings and accidents, but only two produced serious injury or death. On November 9, 1962, Jack McKay experienced an engine failure and landed at Mud Lake, Nevada. The landing gear collapsed, flipping him and the aircraft on its back. Although he recovered from his injuries sufficiently to fly again, he eventually had to retire because of them.

On November 15, 1967, during Michael Adams' seventh flight, he entered a spin from which he was able to recover; however, he could not bring the aircraft out of an inverted dive because of a technical problem with the adaptive flight control system. He died in the resultant crash of X-15 number three.