In a joint research program that NASA conducted with the Air Force, the Navy, and North American Aviation, Inc., the X-15 experimental aircraft set the world's unofficial speed and altitude records for crewed flight. Information from the highly successful program contributed to the Mercury, Gemini, Apollo, and Space Shuttle piloted space flight programs. 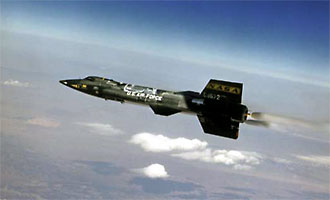 Image above: The X-15 in flight. Credit: NASA

In 1954, the National Advisory Committee for Aeronautics (NACA) Research Airplane Projects Panel discussed the need for a research airplane to continue studies in hypersonic (above Mach 5) and space flight. The NACA established the characteristics of what became the X-15 and presented them to the Air Force and Navy in July. The two services and NACA signed a memorandum of understanding for the joint project in December 1954. The Air Force selected North American to develop three X-15 research aircraft in September 1955.

The X-15 program investigated piloted hypersonic flight in the areas of aerodynamic performance and heating rates, structural behavior during high heating and high flight loads, hypersonic stability and control during exit from and reentry of the atmosphere, and pilot performance and physiology.