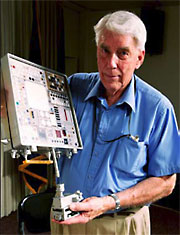 A series of experiments, called the Materials International Space Station Experiments (MISSE), are being conducted jointly by NASA and the Department of Defense (DOD) to investigate the effects of long-term exposure of materials to the harsh space environment.

The only way to be sure how different materials and devices will perform in space is to test them in that environment. Laboratories can simulate just one or two space environments at a time.

Making history as the first experiment to be mounted externally on the International Space Station (ISS), MISSE was created to verify the durability of new materials and devices in space. 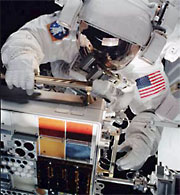 The research from MISSE will evaluate the performance, stability and long-term survivability of materials and components planned for use by NASA, DOD, and commercial companies on future Low-Earth Orbit (LEO), synchronous orbit and interplanetary space exploration missions.

Image to right: An astronaut installs one of the MISSE "suitcases" (or Passive Experiment Containers) on the exterior of the International Space Station during a spacewalk in 2001.
Credit: NASA

MISSE will evaluate materials currently being used and those planned for future space missions. 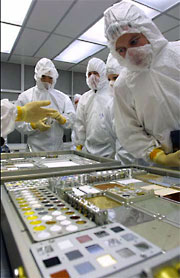 The Long Duration Exposure Facility (LDEF), which was retrieved in 1990 after spending 69 months in LEO, revealed that space environments are very hostile to many spacecraft materials and components. Atomic oxygen, which is the most prevalent atomic species encountered in LEO, is highly reactive with plastics and some metals causing severe erosion. There is also extreme ultraviolet radiation due to the lack of an atmospheric filter.

This radiation deteriorates and darkens many plastics and coatings. The vacuum in space also alters the physical properties of many materials. Impacts of meteoroids and orbiting man-made debris can damage all materials exposed in space.

On Earth, a material can only be subjected to one environment at a time for testing. The combined effects of all of these environments on spacecraft can only be investigated in space.

The MISSE project is testing approximately 1,500 technology test specimens in space. Samples range from components such as switches, sensors and mirrors to materials like polymers, coatings and composites. There are also biological materials such as seeds, spores and various types of bacteria being evaluated.

MISSE tests coatings used to control heat absorption and emission temperatures of satellites. The hostile environment of space limits the useful life of currently used coatings. New coatings, which are expected to be much more stable in space and therefore have longer useful lives, are being tested.

MISSE is also addressing a major problem for manned exploration of Mars–shielding the crew from the very energetic cosmic rays found in interplanetary space. New concepts for lightweight shields will be tested on MISSE. Ultra-light membrane structures are planned for solar sails, large inflatable mirrors and lenses. The effects of micrometeoroid impacts on these materials will also be investigated.

MISSEs 1 and 2 were packed on STS-105 when it lifted off from Kennedy Space Center, Fla., on Aug. 10, 2001. While on orbit, the STS-105 crew attached these MISSEs to the exterior of the ISS. At that time, it was planned that MISSEs 1 and 2 would be returned to Earth approximately one year later and that two new MISSEs (3 and 4) would be deployed in their place to be retrieved after a three-year exposure in space.

Image to right: MISSE 5 sits in a clean room at NASA Langley Research Center before traveling to the International Space Station aboard STS-114.
Credit: NASA/Jeff Caplan

The grounding of the shuttle following the Shuttle Columbia’s STS-107 mission delayed these plans. With their extended stay in space, MISSEs 1 and 2 provided the three-year data and MISSEs 3 and 4 will provide the one-year data. Because of this adjustment, the launch delay of STS-114 had no negative effect on the data return. During the Shuttle Discovery mission (STS-114), MISSE 5 was transported to the ISS. MISSEs 3 and 4 will be transported to the ISS on STS-121.

The suitcases used to transport and expose the MISSE test specimens in space are called Passive Experiment Containers (PECs). The PECs, which are clamped to the exterior of the ISS by astronauts during a spacewalk for the space exposures of the test specimens, were originally developed and used by NASA’s Langley Research Center, Hampton, Va., for ISS Phase I Risk Mitigation Program experiments conducted on the Russian Mir space station.

Once the suitcases have been retrieved, the material samples are tested to see if they still have the unique properties needed to complete space missions. MISSEs have active and passive detectors to monitor the exposure environments that are needed for the post retrieval analysis of the specimens. The active detectors give a time-history reading, or a reading of what happened to the materials at certain points in time.

Image to right: An astronaut is shown next to an open MISSE "suitcase," attached to the International Space Station (ISS). The "suitcases," or Passive Experiment Containers, are non-intrusive to the ISS.
Credit: NASA

The passive detectors report a cumulative measure of the following environments that the test specimens are exposed to:

MISSE 5 has a telemeter and the performance of the test specimens will be transmitted to Earth during the mission. When the MISSE 5 telemeter is not transmitting data, it will be used by amateur radio operators as a relay station.

Image to right: An astronaut finishes attaching a MISSE Passive Experiment Container to the exterior of the International Space Station (ISS). Shuttle Discovery’s STS-114 mission transported MISSE 5 to the ISS and retrieved MISSEs 1 and 2, which spent more than three years on the exterior of the ISS.
Credit: NASA

The MISSE project will also provide educational opportunities for students. MISSEs 3 and 4 will fly approximately 8 million basil seeds that will be given to children for science experiments to stimulate interest in space science.

For more information on MISSE, see:

For more information on NASA, see: