Photograph above of giant vanes which help air flow around a corner in this transonic wind tunnel at NASA's Langley Research Center.

Wind tunnels are machines for "flying" aircraft on the ground. They are tubelike structures or passages in which wind is produced, usually by a large fan, to flow over objects such as aircraft, engines, wings, rockets or models of these objects. A stationary object is placed in the test section of a tunnel and connected to instruments that measure and record airflow around the object and the aerodynamic forces that act upon it. From information gathered in these observations, engineers can determine the behavior of an aircraft or its components at takeoff, while cruising, and during descent and landing.

Wind tunnels also help engineers determine the performance of, and eliminate "bugs" in, new designs of civil and military aircraft without risk to a pilot or costly aircraft. Responses to flight condition of new materials and shapes for wings, ailerons, tails, fuselages, landing gear, power systems and engine cowlings can be assessed before these designs are incorporated into aircraft.

Today, no aircraft, spacecraft or space launch or reentry vehicle is built or committed to flight until after its design and components have been thoroughly tested in wind tunnels. Every modern aircraft and space rocket has made its maiden flight in a wind tunnel. Wind tunnels have been among the key tools which have made American aircraft and aeronautical equipment the most desired and most widely used in the world.

The National Aeronautics and Space Administration maintains the largest number and variety of wind tunnels ever operated by any single agency or company. NASA's 42 major wind tunnels vary in size from those large enough to test a full-size airplane to those with a test section only a few inches square where models as small as a match are tested.

Some of NASA's wind tunnels are equipped with lasers for a technique called laser doppler velocimetry. This is one of several new non-intrusive techniques that make possible precise determination of velocities with light beams. The light beams do not interfere with the airflow, as happens with measuring instruments that require a physical presence in the test chamber.

Like aircraft, wind tunnels have come a long way in their technological development. Their sophistication has kept pace with the needs of designers. The first major U.S. Government wind tunnel was built at NASA's Langley Research Center and became operational in 1921. The Center was the first major research facility of the U.S. National Advisory Committee for Aeronautics (NACA), which was founded in 1915. The NACA later became a part of NASA when it was established on October 1,1958, to carry out space research and exploration and to continue the NACA's aeronautical work. 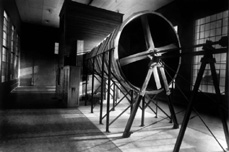 Late in the last century, however, the first wind tunnels were little more than boxes or pipes. A fan or other device propelled air over a model of an aircraft or of a wing suspended in the pipe or box. Observation instruments were crude. The researchers had to gather many of the test results with their own eyes. The Wright brothers designed and used such primitive tunnels to develop the wing configurations and control surfaces with which they achieved the first powered human flight early in this century.

Early theorists became aware that an aircraft's shape, construction and materials significantly influence its ability to climb and carry loads. Researchers discovered that subtle variations in the shape of wings and of the contours of other surfaces can cause dramatic changes in air resistance. This affects speed, fuel economy and other flight characteristics, such as maneuverability and load capacity.

Photograph to left is a scale model of the Shuttle Orbiter. It is mounted inside the 40- by 80-foot test section of a wind tunnel at NASA's Ames Research Center. Instrumented supports provide data on the model's aerodynamic characteristics.

The world's first high-pressure tunnel, the "Variable Density Tunnel," began operations at Langley Research Center in March 1923. That tunnel's importance was emphasized again in 1986, when it was designated a National Historic Landmark by the U.S. Department of the Interior.

In wind tunnels at NASA's Ames and Langley Research Centers, crucial reentry tests were performed in the 1970s with the U.S. Space Shuttle. These tests simulated the severe heating from atmospheric friction that the space transportation system later had to withstand during its flights in the 1980s. Simulations also have been conducted to study the entry problems anticipated for unmanned planetary craft designed for passage through the extreme temperatures and unusual atmospheric gases of Venus, Jupiter and other solar system bodies.

Today's aircraft are larger, cruise faster and higher, carry more passengers and cargo, and use less fuel per mile than most of their predecessors. Aircraft now being developed are expected to show significant improvements in all of these performance characteristics.

One of Langley Research Center's most advanced facilities is the National Transonic Facility (NTF), which completed its first year of operation in 1984. In the NTF, super cold liquid nitrogen is injected and evaporated into a gas that is accelerated through the tunnel's test section at speeds up to 1.2 times the speed of sound. The low temperatures increase the density and decrease the viscosity of the atmosphere and, thus, simulate full-scale flight conditions at transonic speeds with great accuracy.

Another advanced Langley facility is the 8-Foot High Temperature Tunnel (8' HTT). This facility, which started operations in 1967, was constructed to verify flight-weight structure at Mach 7 flight conditions. The 8' HTT was removed from service in 1988 to add an oxygen enrichment system for scramjet testing. Langley Research Center has long been a major contributor to scramjet development.

A wind tunnel is often identified by the size of its test section, as opposed to the overall size of the tunnel. Test sections are the chambers in which aircraft models or other objects are tested. In a 13-inch research tunnel at Langley Research Center, experiments are underway using "magnetic suspension." Models are held in position with powerful magnets to eliminate the need for physical mounting mechanisms which interfere with the airflow or alter the model's geometry.

Photograph to right is the National Transonic Facility which is one of 23 major wind tunnels at NASA's Langley Research Center.

NASA's Lewis Research Center is know for its studies and innovations in aircraft propulsion systems. One of its wind tunnels, built in the 1950s, has a 10- by 10-foot test section in which aircraft models can be examined while their engines are running. In such tests, new air is continuously drawn into the tunnel and is then expelled after passing through the tunnel only once. The tunnel can also be operated in a mode like most other wind tunnels which circulate the same air repeatedly through their loops. In this way, a tunnel can better maintain high atmospheric pressure, desired temperatures or moisture content in its test section.

Photograph at left is ice research at NASA Glenn Research Center. Ice on wings and other aircraft surfaces has been a maior cause of accidents. A 5,000 horsepower fan in this tunnel can produce airspeeds up to 300 mph, and a 2,100-ton cooler can lower the temperature to -30 degrees F inside the Icing Research Tunnel at NASA's Glenn Research Center.

The 8- by 6-Foot Propulsion Research Tunnel at Lewis can push 150,000 pounds of air every minute across the test section at up to twice the speed of sound. In 1968, a 9- by 15-foot subsonic test section was added to that tunnel for research on surfaces and power plants of VISTOL (vertical and short-takeoff-and-landing) aircraft.

The Lewis Research Center's 6- by 9- by 20-Foot Icing Research Tunnel, built in 1944, is the world's largest refrigerated tunnel for year-round use to examine protection systems against hazardous ice formations on wings, air inlets, rotors and V/STOL aircraft.

The largest wind tunnel in the world is at NASA's Ames Research Center. This subsonic tunnel, which can test planes with wing spans of up to 100 feet, is over 1,400 feet long and 180 feet high. It has two test sections: one 80 feet high and 120 feet wide, the other 40 feet high and 80 feet wide. Air is driven through these test sections by six 15-bladed fans. Each fan has a diameter equal to the height of a four-story building. The fans are powered by six 22,500-horsepower motors.

Photograph to the right is the world's largest wind tunnel that is housed in this huge multi-roofed building at the NASA Ames Research Center, Mountain View, California. One of the tunnel's air intakes is in the frame-like structure.

The Ames and Langley Research Centers each have a "Unitary Plan Facility." The Ames facility opened in 1956, with three test sections--a transonic section that is 11 feet wide by 11 feet high, and two supersonic sections, that measure 9 feet by 7 feet and 8 feet by 7 feet. In these sections, the air can be adjusted to simulate flying conditions at various altitudes. The computer age has allowed researchers to take a new look at improving wind tunnel data normally available at transonic speeds. The installation of computer-controlled walls allows air to be automatically added or expelled from the tunnel walls. This lessens interference on the airflow by the walls. Thus, the wind tunnel can more realistically simulate conditions of an aircraft in the open, wall-free natural flight environment.

Similar advantages are being pursued at the Lewis and Langley Centers, where engineers are experimenting with various kinds of "adaptive walls" or "smart walls." These expand and contract in ingenious ways to virtually remove the distorting effects walls can have on a tunnel's airflow. Langley's 0.3-Meter Transonic Cryogenic Tunnel has an adaptive wall test section that has been operational since March 1986.

Marshall Space Flight Center's 14- by 14-Inch Transonic Wind Facility got its name because it can conduct tests in three speed regimes, from subsonic through transonic to supersonic. This means it can test in ranges from 1.5 to five times the speed of sound.

The Department of Defense operates several major wind tunnels, as do some U.S. industries and universities. Nations which have major wind tunnels listed in NASA's "Aeronautical Facilities Catalogue" include the United Kingdom, 27; France, 18; Japan, 16; West Germany, 11; the Netherlands. 4; and Canada, 5.

NASA's wind tunnels are a national technological resource. They have provided vast knowledge that has contributed to the development and advancement of the nation's aviation industry, space program, economy and the national security. Amid today's increasingly fierce international, commercial and technological competition, NASA's wind tunnels are crucial tools for helping the United States retain its global leadership in aviation and space flight.