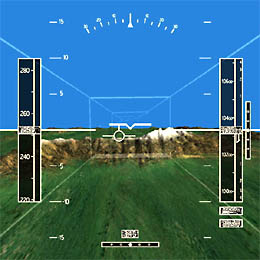 Photograph to right is a revolutionary cockpit display system being developed with seed money from NASA would help prevent the world's deadliest aviation accidents.

Limited visibility is the single greatest contributing factor in the most fatal worldwide airline and general aviation crashes, according to Michael Lewis, director of the NASA Aviation Safety Program (AvSP). How to make flying safer by giving flight crews sunny conditions all the time is a challenge facing AvSP based at the Langley Research Center in Hampton, Va.

NASA is working with industry to help create Synthetic Vision, a kind of virtual reality display system for cockpits. New technologies being developed by AvSP and its partners would offer pilots a clear, electronic picture of what's ahead outside their windows, no matter what the weather or time of day.

"With Global Positioning System signals pilots can now know exactly where they are," said Lewis. "Add super-accurate terrain databases and graphical displays and we can now draw three-dimensional moving scenes that will show pilots exactly what's outside. The type of accidents that can happen in poor visibility just don't happen when pilots can see the terrain hazards outside."

The Aviation Safety Program envisions a system that would use new and existing technologies, such as Global Positioning System signals, terrain databases and sensors, to incorporate data into displays in aircraft cockpits. The displays would show terrain, ground obstacles, air traffic, landing and approach patterns, runway surfaces and other relevant information to the flight crew.

NASA initially committed $5.2 million that was matched by industry funds to advance Synthetic Vision projects. More funding will be designated to accelerate commercialization and to make some systems feasible by 2005.

NASA researchers tested a prototype of Synthetic Vision in flights over Asheville, N.C., in 1999. Engineers loaded an experimental terrain database that had been augmented by sophisticated computer rendering techniques onto a research aircraft once owned by the United States Air Force.

The Total In-Flight Simulator or TIFS is a highly modified Convair 580 built in the 1950s and transformed into a "flying simulator" in the early 1970s. It is based in Buffalo, N.Y and operated by the Veridian Corporation.

Photograph above is the Total In-Flight Simulator (TIFS)

TIFS is outfitted with two cockpits: a safety cockpit that is always available to fly the plane and another one that is used to test aviation innovations. The simulation cockpit is equipped with special instruments and displays. During the Asheville tests pilots assessed three-dimensional computer images of the region. Those pictures were shown on various simulation cockpit displays. High definition television cameras fed video into the simulation cockpit to provide a comparative out the window scene of the real world.

Research pilots flew more than a dozen flights in and out of the Asheville Regional Airport.

One pilot commented during a flight, "The terrain picture, the synthetic vision display, is just terrific. I find myself forgetting that that's not the real world I'm looking at."

NASA plans to use images collected by the Shuttle Radar Topography Mission (SRTM) in February 2000 to supply aircraft with an extensive world terrain map.

Using imaging technology that flew on the space shuttle twice in 1994, coupled with additional innovations, SRTM was designed to collect 3-D measurements of 80 percent of the Earth's land surface with an accuracy of better than 53 feet. 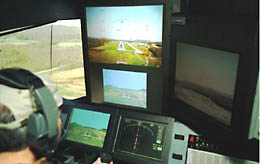 Photograph to the right is a research pilot comparing a terrain database to the real world.

AvSP is a partnership with the Federal Aviation Administration, the Department of Defense, aircraft manufacturers, airlines and universities. This partnership supports a national goal to reduce the fatal aircraft accident rate by 80 percent in 10 years and by 90 percent in two and a half decades.

The aviation safety initiative was created in the summer of 1997 in response to a report from the White House Commission on Aviation Safety and Security. NASA has designated about $550 million over five years for aviation safety research and development, with more funding expected to follow.

For more information on the NASA Aviation Safety Program please check the Internet at: