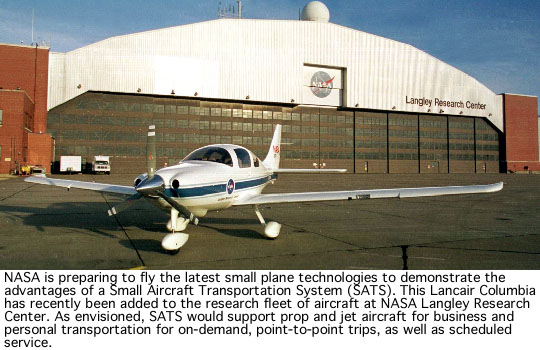 The vision for SATS is bold. NASA has begun a research initiative to prove the SATS concept will work. This initiative covers a five-year period from FY 2001 through FY 2005, with funding of $69 million.

NASA plans to conduct flight research and demonstrations of new technologies at a variety of airports, including Danville, Virginia.

Throughout our history, saturation of existing transpor-tation systems helped drive the search for the next system innovations. Looking forward 25 years, beyond saturation of the National highway and skyway systems (gridlock and hublock), the Nation faces new challenges in creating transportation-driven economic growth and wealth.

The SATS system concept targets the stimulation of latent markets of consumers who make transportation choices based mostly on time considerations. The latent market for transportation is defined as trips not taken (for reasons of time, cost, convenience, comfort, or other factors), trips not imagined (because consumers have never been able to experience the service or product), and trips not possible (in the absence of enabling vehicles and infrastructure).

Can you imagine an Arlington e-commerce consultant calling on clients in Charlottesville, Danville, and Norfolk, Virginia in a single business day and returning home for dinner with the family?

Can you picture same-day transportation 300 miles roundtrip from Farmville, Virginia, with no scheduled air service, to Johns Hopkins Medical Center in Baltimore, Maryland, for an outpatient medical treatment?

Can you envision same -- or next day -- small package delivery from a dot-com book company to smaller Virginia communities like South Boston, Yanceyville, Gretna or Hurt?

Now imagine that the aircraft and the airports needed for these transportation visions are readily available to the public, with jet-like performance and safety at propeller-like prices. Imagine hub-and-spoke-like accessibility to the smallest of neighborhood airports, without needing radar and control towers, and without needing more land for protection zones around small airports.

The SATS concept of operations uses small aircraft for business and personal transportation, for on-demand, point-to-point travel between smaller regional, reliever, general aviation and other landing facilities, including heliports. The SATS architecture contemplates near-all-weather access to any landing facilities in the U.S. SATS would leverage Internet communications technologies for travel planning and scheduling, which would also minimize user uncertainty regarding destination services. It would operate within the National Airspace System, initially about 5,400 existing public-use-landing facilities (scheduled air carriers serve only about 660 of these facilities). A total of over 18,000 landing facilities serve a vast number of communities in the U.S; ultimately, essentially all of these facilities could employ SATS operating capabilities.

The past seven years of investment by NASA in Advanced General Aviation Transport Experiments (AGATE) and General Aviation Propulsion (GAP) technologies have led to the emergence of a new generation of small aircraft. In addition, a new industrial business strategy is emerging to create innovations in delivering transportation services to the marketplace. It appears likely that the early adopters will have access to "jet-taxi services." The aircraft will incorporate state-of-the-art advancements in avionics, airframes, engines, and advanced pilot training technologies. However, these new aircraft will make the SATS vision for transportation available to the general public only if new concepts for airspace architecture and operations can be developed.

SATS is guided by a mandate to "prove SATS works." The research program will invest in four operating capabilities:

The SATS proof-of-concept effort will culminate in a joint NASA/FAA/industry demonstration of these operational capabilities. The results will establish the basis for future decisions by local, state, and federal policy makers regarding SATS and air transportation.