VIDEO: Alan Shepard: Ambassador of Exploration (RT: 9:38)
On May 5, 1961, Alan Shepard was propelled into space aboard the Mercury capsule Freedom 7. His 15-minute suborbital flight was part of Project Mercury, the United States' first man-in-space program. The objectives of the Mercury program, eight unmanned flights and six manned flights from 1961 to 1963, were quite specific: To orbit a manned spacecraft around the Earth, investigate man's ability to function in space, and to recover both man and spacecraft safely. Project Mercury included the first Earth orbital flight made by an American, John Glenn in February 1962.

The five-year program was a modest first step. Shepard's flight had been overshadowed by Russian Yuri Gagarin's orbital mission just three weeks earlier. President Kennedy and the Congress were concerned that America catch up with the Soviets. Seizing the moment created by Shepard's success, on May 25, 1961, the President made his stirring challenge to the nation -- that the United States commit itself to landing a man on the moon and returning him to Earth before the end of the decade. Apollo was to be a massive undertaking -- the nation's largest technological effort.

The first home of Project Mercury was Langley Research Center in Hampton, Va. More significantly, most of the leadership for Project Mercury and, later, Gemini and Apollo, were Langley engineers. Until then, the Langley lab was not known to many outside the aerospace community.


NASA LANGLEY'S MAJOR CONTRIBUTIONS TO PROJECT MERCURY
Langley Research Center, established in 1917 as the National Advisory Committee for Aeronautics (NACA) Langley Memorial Aeronautical Laboratory, was the first U.S. civilian aeronautical research facility devoted to the advancement of the science of flight. Almost every aspect of flight was studied at Langley and, during World War II, at the request of the military, the Pilotless Aircraft Research Division (PARD) was begun. Aiding the military's development of pilotless aircraft was how researchers at Langley first got interested in the problems of space exploration. Learning the techniques associated with building, instrumenting, launching and monitoring rockets and missiles later proved essential to the American space program and Project Mercury. 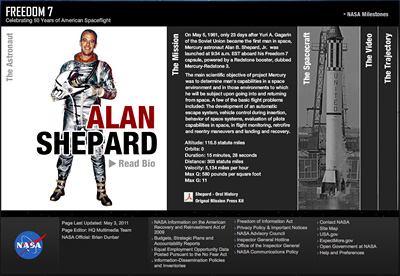 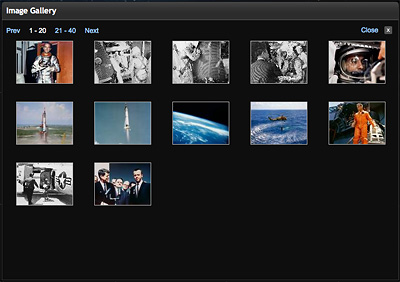 Alan Shepard and Freedom 7
Photo Gallery
NASA Langley made many important contributions to Project Mercury. The research center and its staff members were transformed by the Nation's rush to make human spaceflight a reality. Once dedicated exclusively to the advancement of aeronautics, Langley engineers were reassigned, and asked to help solve problems far removed from their original training and experience. "Basic" research was supplanted by "project" work as the Langley laboratory was renamed NASA Langley Research Center. The physical plant was dramatically expanded as was the center's staff and budget. For the first time, Langley began to work with large contractors on major research endeavors in what was an exciting time for both researchers and the Nation.

After President Eisenhower delegated authority for the country's manned space program to the National Aeronautics and Space Administration in 1958, the first NASA administrator, T. Keith Glennan, assigned the working level responsibility to Langley's assistant director Robert Gilruth. Gilruth asked the small group of designer/engineers from the Pilotless Aircraft Research Division (PARD) to step up their studies of ballistic-shaped spacecraft. In November 1958, Gilruth garnered many of the forces from PARD to form the Space Task Group (STG) to manage Project Mercury, the first phase of NASA's manned space program.

As Project Mercury matured, the STG grew. By the summer of 1959, there were 400 people assigned to finish mission definition studies and begin the advanced engineering work. One small group was sent to Florida to ready NASA's manned launch site at the Atlantic Missile Range, while another group went to oversee the work of the prime spacecraft contractor McDonnell Aircraft Corp. in St. Louis. While more plans for space exploration were being mapped out, NASA made arrangements to expand its facilities. Gilruth wanted Langley to be the main center but their were other contenders. The two main sites under consideration were in Massachusetts and Texas. In the end, the Manned Spacecraft Center, now the Johnson Space Center, was built in Houston. As construction was completed, Gilruth and the Space Task Group moved to Texas. 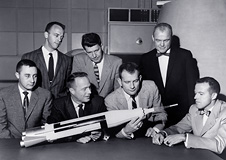 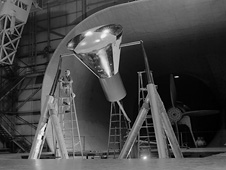 A technician checks the Mercury full-scale capsule model prior to testing in the 30- by 60-Foot Tunnel at NASA Langley Research Center in 1959. This technique allowed researchers to measure and assess flight characteristics as well as evaluate control options. Credit: NASA 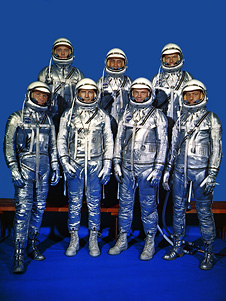 The original seven Mercury astronauts during training at NASA Langley Research Center. From left to right, back row they are Alan Shepard, Virgil "Gus" Grissom and L. Gordon Cooper; front row, Walter Schirra, Donald "Deke" Slayton, John Glenn and Scott Carpenter. The suits were the ones used by the astronaults during their Mercury space flights. Credit: NASA 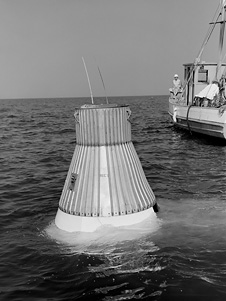 A model of the Mercury capsule undergoes floatation tests in the Back River. Credit: NASA 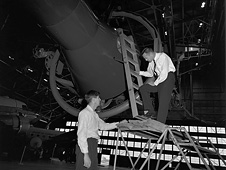 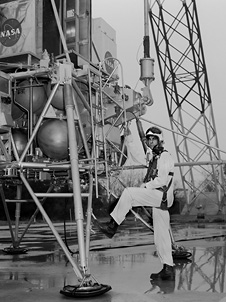 Alan Shepard was one of 20-some astronauts who used the Lunar Landing Research Facility and the Lunar Excursion Module Simulator to practice piloting problems they would encounter in the last 150 feet of descent to the surface of the moon. Shepard was the only one of the seven original Mercury astronauts to train with the simulator and make a lunar landing. Credit: NASA

While numerous aerodynamic, structural, materials and component tests were being conducted at NASA Langley, one team of Langley researchers were scheduling wind tunnel tests at an Air Force facility in Tennessee.

NASA Langley scientists and researchers had been working on a variety of rocket designs -- launch, guidance, automatic control and telemetry systems were all under development before Project Mercury took shape in 1958. The Little Joe and Big Joe were two important programs.

Little Joe was a solid-fuel rocket, and one of the earliest U.S. launch vehicles based on the principle of the clustered rocket engine. Langley's Maxime Faget and Paul Purser, who conceived and designed the four-cluster, solid-propellant booster, nicknamed the project Little Joe. The first successful launch of Little Joe occurred at Wallops Island, Va. in October 1959 -- soaring 40 miles out over the Atlantic Ocean. The rocket was 50 feet tall and weighed 28,000 pounds. Little Joe's engines produced a total of 250,000 pounds of thrust at takeoff. Little Joe was of great importance to Project Mercury, carrying instrumented payloads to various altitudes, and allowing engineers to check the operation of the Mercury capsule escape rocket and recovery systems.

Little Joe rockets were also used to send two Rhesus monkeys, Sam and Miss Sam, into space in December 1959 and January 1960. In the nose cone of one Little Joe capsule, Sam flew 55 miles into space before returning. Sam provided flight engineers with a better idea of how the Mercury astronauts would fare on their subsequent flights.

The Big Joe program involved ballistic tests of a Mercury capsule on an Atlas missile. Big Joe was a one-ton, full-scale instrumented mock-up of the proposed Mercury spacecraft, designed to test the effectiveness of the ablative heat shield and the aerodynamic characteristics of the capsule design. Big Joe was successfully launched on Sept. 9, 1959. The Big Joe project, from design to launch, was achieved in less than a year -- the first step in providing a launch vehicle for Project Mercury. Big Joe's launch atop an Atlas D booster showed that a capsule could be launched (100 miles into the air), separate from the Atlas rocket and fall back to Earth in conditions that closely simulated orbital reentry. It also proved to be an excellent exercise for military recovery teams and confirmed that the blunt-body capsule had performed as Langley wind-tunnel tests and other laboratory studies had predicted.

The largest, and most logistically challenging, Langley effort for Project Mercury was the Mercury tracking range project. Long-range communications were Langley's responsibility. The planning and implementation of an integrated spacecraft tracking and ground instrumentation system, developed with contract organizations, was accomplished by non-STG Langley personnel. Project managers at the Manned Spacecraft Center needed a network of linked stations capable of receiving, processing and reacting to a variety of voice, radar and telemetry data. Prior to Project Mercury, most long-distance communications were done via undersea telegraph cable or radar. The NASA Langley researchers had to build their own global communications system to help ensure Project Mercury's success.

Communication sites were plotted, surveyed and built worldwide by various companies. The result was a system that could maintain constant radio communications with the orbiting Mercury astronauts. NASA Langley supervised the site contractors and, within two years, saw an "around-the-world-for-the-first-time" communications system power up. This was the foundation of the present Mission Control Center where state-of-the-art workstations allow project managers to simultaneously track numerous spacecraft and satellites.

Seven astronauts were chosen from among more than 100 men tested at Wright Air Development Center in Dayton, Ohio and Lovelace Clinic in Albuquerque, New Mexico. At that time, no one really knew how to select and train astronauts. The search process was rigorous but quickly focused on military test pilots. Langley engineer Charles Donlan and test pilot Robert Champine played important roles in the screening and selection process.

The STG staff put the astronauts through several spaceflight simulation systems and techniques to familiarize them with the Mercury capsule and evaluate their effectiveness with the capsule control systems. A closed-loop analog simulator became the basis for several "spaceflights." This simulator had a simple chair with sidearm controller and rudder pedals and was later refitted with a three-axis controller and a molded couch individually made for each astronaut.

The training at Langley also included a regimen of physical exercise and scuba-diving operations designed to simulate weightlessness and the types of sensory disorientation that they might experience during reentry from space. In Langley's large hydrodynamics tank and in the Back River behind the Langley East Area, the Mercury astronauts also learned how to get out of the space capsule as it floated in the water.

Project Mercury Director Thanks NASA Langley for Its Project Work Project Mercury ended in the summer of 1963 after four successful orbital flights. The STG completed its move to the Manned Spacecraft Center in Houston, Texas, and NASA and the nation geared up for the Gemini and Apollo programs.

Dr. Robert R. Gilruth, head of Project Mercury at Langley, wrote to NASA Langley director Floyd Thompson: "It is fitting that the Manned Spacecraft Center express its sincere appreciation to the Langley Research Center for the invaluable contributions that the Center has played in our initial manned space flight program. The Manned Spacecraft Center owes much to Langley, since ... Langley really was its birthplace."

Specific contributions that NASA Langley made to Project Mercury included assistance in the Big Joe program; implementation of the Little Joe program; the planning and carrying out of the Mercury tracking and ground instrumentation system; numerous aerodynamic, structural materials and component evaluation and development tests; engineering, shop instrumentation and logistic support for much of the Space Task Group in-house testing; and finally, administrative support and office space from late 1958 to mid-1962 when the STG moved to Houston. Gilruth wrote, "As you can see, all elements of the Langley Center provided major assistance to Project Mercury, and we are deeply grateful for this help."

To learn more about Project Mercury and NASA's other spaceflight programs, refer to: