The passenger jet of the future is taking shape. NASA and its industry partners developed a concept for a next-generation supersonic passenger jet that would fly 300 passengers at more than 1,500 miles per hour -- more than twice the speed of sound. As envisioned, the High-Speed Civil Transport (HSCT) would cross the Pacific or Atlantic in less than half the time of modern subsonic jets, and at a ticket price no more than comparable, slower flights. NASA's High-Speed Research (HSR) program developed technology to make the HSCT possible within 20-25 years. Although phased out in FY 1999 because of economic constraints, this highly successful program was supported by a team of major U.S. aerospace companies in a research program that began in 1990. The Program participants achieved technical and management excellence while meeting or exceeding all of the original HSR Program goals.

In December 1995, a single aircraft concept was chosen to focus the intensive technological development planned for the following three years of the HSR program. This aircraft, the Technology Concept Airplane (TCA), was not an actual design or airplane that could be built, but it served as a common reference point for HSR technology development. The TCA evolved from separate Boeing and McDonnell Douglas designs. Computer modeling and wind tunnel tests were used to produce a single concept with superior aerodynamic performance and operational characteristics, which also satisfied environmental goals. The technology focus was significantly narrowed in the areas of propulsion and airframe structural components.

New high-temperature composite materials and structural concepts were selected for fabrication and testing of various subcomponents in the TCA's fuselage and wings. Selecting the right structures and materials for an airframe designed to fly 60,000 hours in its lifetime, in temperatures approaching 350 degrees Fahrenheit, is critical to making a future supersonic transport economically feasible. Weight and manufacturing costs must be minimized, while strength and durability are maintained.

After much design, analysis and testing, the structural concepts studied early in the program were narrowed down to two types, namely, skin-stringer construction for the fuselage and honeycomb sandwich for the wing. This allowed the program to focus on the lightest weight, highest performance designs and move from testing small coupons and elements to testing large panels. In one test, a 120-inch by 66-inch composite panel was subjected to more than one million pounds of force before it failed Concept of a High-Speed Civil Transport.

Imagine flying a supersonic jet (like the Concorde) at 1,500 mph with no front windows in the cockpit. NASA engineers developed the technology that would replace the forward cockpit windows in a future supersonic passenger jet with large sensor displays. These displays would use video images, enhanced by computer-generated graphics, to replace the view out the front windows. An eXternal Visibility System could provide safety and performance capabilities that exceed those of unaided human vision, while eliminating the need for a heavy, mechanically drooped nose such as that on the Concorde.

Critical to the success of a future supersonic transport is a propulsion system that does not harm the environment, has noise comparable to other future airliners and has high performance and durability to make the aircraft affordable to operate. Under the HSR program, researchers developed advanced engine concepts that would allow a future supersonic airliner to be environmentally acceptable and economically viable. 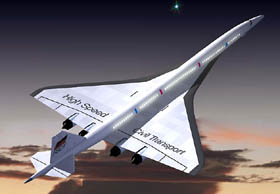 Image to left is artist's concept drawing of the HSR aircraft.

Propulsion components including unique inlet, fan and nozzle designs were developed that would allow a future HSCT to operate without objectionably high noise levels. Tests on innovative combustor component designs demonstrated the ability to significantly reduce the nitrogen oxide emissions which are harmful to the environment. In addition, new engine materials were developed that would be able to withstand supersonic operations with temperatures near 3000 degrees Farenheit for most of the flight. Designers successfully incorporated all these technologies into a single propulsion system design for future supersonic transports.

Another form of noise pollution is the sonic boom. When an aircraft flies faster than the speed of sound it produces sound waves that can reach the surface of the Earth, creating an often startling and annoying noise called a sonic boom. Although studies have found ways to redesign supersonic aircraft to minimize sonic booms, these methods seriously compromise the aerodynamic performance of the aircraft. Thus, future HSCTs would be expected to fly at supersonic speeds only over the oceans.

The Atmospheric Effects of Stratospheric Aircraft project aided in the development of environmental standards for HSCT exhaust emissions. The atmospheric models developed by this program show a negligible impact on stratospheric ozone concentrations from a fleet of 500 HSCTs using the advanced technology engine components.

To properly characterize the radiation environment in which the HSCT will operate, NASA executed a program to measure high-altitude cosmic and solar radiation. Using the NASA ER-2 aircraft, researchers measured cosmic and solar radiation at altitudes between 52,000 and 70,000 feet. These data were used to characterize and define the radiation environment for both crew members and the frequently flying public on future HSCTs. Although the exposure levels would be higher at the HSCT cruise altitudes than for current subsonic flight altitudes, the typical flying public would actually receive less radiation exposure than on today's subsonic transports because of the higher speed of the HSCT (less time in the air).