Imagine boarding a commercial airliner to fly across the Pacific in only four hours. Or flying to Europe in a plane shaped like a giant wing, in the company of 800 other passengers. These are only two of the many future aircraft concepts being studied at NASA Langley Research Center.

NASA Langley Research Center has been shaping the future of flight since 1917. From the biplanes of the 1920s to the newly modified F/A-18 jet fighter of the next century; from the commercial Douglas DC-3 to the Boeing 777, NASA Langley researchers have helped determined how people will fly for more than 80 years.

Langley was built in 1917 as the first research center of the National Advisory Committee for Aeronautics (NACA), the precursor to NASA. Then, as now, Langley's mission was to develop the technologies necessary to assure world preeminence of the U.S. civil and military aeronautics industries. From commercial transports to reusable space vehicles, NASA Langley researchers have worked for more than eight decades to make air and space travel faster, safer and less expensive.

NASA and its industry partners have developed a concept for a next-generation supersonic passenger jet that would fly 300 passengers at more than 1,500 miles per hour - more than twice the speed of sound. As envisioned, the High-Speed Civil Transport (HSCT) would cross the Pacific or Atlantic in less than half the time of modern subsonic jets, and at a ticket price less than 20 percent above comparable, slower flights. 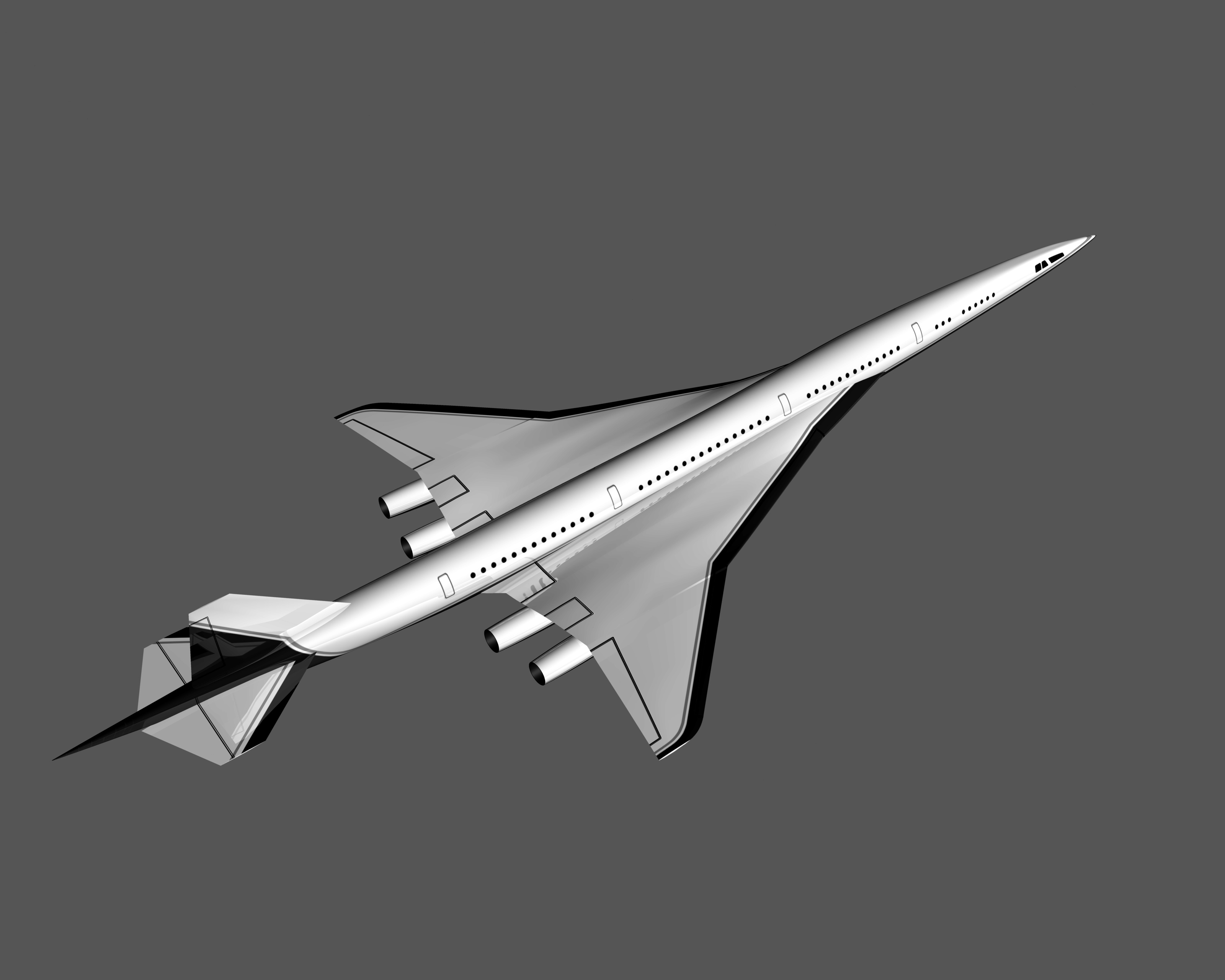 Technology to make the HSCT possible is being developed as part of NASA's High-Speed Research (HSR) program, managed by NASA Langley. Langley engineers are actively involved in developing technologies for the HSCT airframe, including the materials and structures from which it will be built. Langley also leads the development team for the HSCT cockpit, which will have side windows, but no forward-facing windows.

Air travelers of the future may step onto a double-deck jetliner that resembles a flying wing, capable of carrying up to 800 passengers over 7000 miles at a cruise speed of approximately 560 mph. The Blended Wing Body (BWB) design will maximize the overall efficiency of the aircraft by integrating the engines, wings and the body into a single lifting surface. The BWB concept has been tested extensively in NASA Langley's many wind tunnels, including the National Transonic Facility.

Image at left is a general aviation design concept.

The BWB will also provide new technologies for many future aircraft, helping the U.S. aircraft industry compete successfully in the 21st century. Some applications of BWB technology include commercial transports and very-long-range military cargo aircraft.

The challenge for the more than 70 organizations that make up the Advanced General Aviation Transport Experiments (AGATE) consortium is to create a small aircraft transportation system that is an alternative to short-range automotive trips for both private and business transportation. Using small aircraft, for example, would allow a business executive to travel in a single day to three plants 250 miles apart. This new aviation system would make time-sensitive, short-haul trips more affordable for business, medical, public safety and recreational pursuits. AGATE is also committed to making personal aircraft as affordable as luxury automobiles, flying as safe as driving on the Interstate, and increasing the ease at which pilots learn and maintain their flying skills.

Image at right is a model of the Blended Wing Body

The AGATE program, which is headquartered at NASA Langley, focuses on the development of new general aviation technologies, including bad weather flight and landing systems, complete with graphic displays of weather and guidance information; emergency coping and avoidance measures that use onboard systems to support decision making; traffic avoidance systems; systems that reduce the flight planning workload and enhance passenger safety; and systems designed to improve passenger comfort, aircraft performance and efficiency. The success of the AGATE program will be measured in terms of increases in pilot population, flight hours, airport utilization and new aircraft deliveries.

The goal of the NASA Aviation Safety Program is to reduce the fatal aircraft accident rate by 80 percent in 10 years, and by 90 percent in two decades. This ambitious five-year, $500-million program is a partnership that includes NASA, the Federal Aviation Administration (FAA), the aviation industry and the Department of Defense. NASA Langley leads the safety program, with critical roles played by three other NASA centers: Ames Research Center in Moffett Field, Calif.; Dryden Flight Research Center in Edwards, Calif.; and Lewis Research Center in Cleveland, Ohio.

Major strides have been made in the last 40 years to make flying the safest of all major modes of transportation. Because air travel is expected to triple in the next 20 years, more technological advances are needed to prevent a corresponding rise in the accident rate. The NASA Aviation Safety Program will emphasize not only accident reduction, but also a decrease in injuries when accidents do occur. The program will include research to reduce human error-caused accidents and incidents; predict and prevent mechanical and software malfunctions; and eliminate accidents involving hazardous weather and controlled flight into terrain. The safety program also will use information technology to build a safer aviation system to support pilots and air traffic controllers. The FAA will help define requirements and actions to enact many of the safety standards.

NASA is working with aviation industry teams to put up-to-the-minute, graphical weather displays in the cockpits of commercial airliners and general aviation aircraft.

NASA envisions an aviation weather information (AWIN) system that would allow aircraft to be both sources and users of real-time weather information. Sensors aboard aircraft would provide data for onboard weather systems, as well as systems on the ground and in other aircraft. An AWIN-equipped cockpit would contain easy-to-read, real-time displays of weather conditions across the country. Using the AWIN system, pilots would be able to easily monitor possible weather trouble spots en route and make better, more cost-efficient routing decisions.

Weather information would get to and from aircraft by satellite and ground stations using broadcast datalinks and two-way communications systems. Decision aids, such as alarm systems and displays of suggested routes to help pilots avoid potentially hazardous weather situations, are also included in some AWIN designs.

Accidents on Snow and Ice - Improving Runway Friction and Traction

NASA Langley is leading an international effort to help prevent accidents by aircraft losing traction on icy runways. Ice or snow on a runway was a factor in approximately 30 airplane accidents between 1983 and 1995, according to reports from the National Transportation Safety Board. The Langley research team is working to better understand runway friction, improve tire designs, develop better chemical treatments for snow and ice, and formulate new types of runway surfaces that minimize bad weather effects.

Inaccurate, incomplete or confusing runway surface information has been a contributing factor in a number of cases where airliners have slid off the end of the runway upon takeoff or landing, or have been dangerously slow in reaching liftoff speed due to the slowing effects of snow, ice or rain.

To gather more data on these phenomena, NASA Langley researchers, in conjunction with the FAA and Air Transport Canada, have made measurements in the northern U.S. and Canada over several winters. The researchers compare friction measurements from ground vehicles and research aircraft on various runway conditions. This data is helping improve both the forecasting of runway conditions, and the aircraft equipment needed to deal with those conditions.

NASA has established a multi-year experimental hypersonic ground and flight test program called Hyper-X. (Hypersonic speeds are those greater than five times the speed of sound). The Hyper-X program seeks to demonstrate "air-breathing" engine technologies that can increase the payload capacity of future hypersonic aircraft or reusable space launchers.

Image to left is the airflow around the Hyper-X

Payload capacity will be increased by discarding the heavy oxygen tanks that high-altitude rockets must carry, replacing them with a propulsion system that uses the oxygen in the atmosphere. Liquid hydrogen will be used to fuel the Hyper-X research vehicles. The Hyper-X program is a NASA Aeronautics Enterprise program being conducted jointly by Langley and the Dryden Flight Research Center. Langley is the lead center and is responsible for hypersonic technology development. Dryden is responsible for flight research.

The United States is developing reusable launch vehicles (RLVs) that are lightweight and robust, and designed for little maintenance and low-cost operations. The NASA Advanced Space Transportation Technology (ASTT) Program hopes to speed the commercialization of space and improve U.S. economic competitiveness by making access to space as routine and reliable as today's airline industry, while reducing costs and enhancing safety and reliability.

Scale models of the X-33 and X-34 RLVs have undergone extensive testing in NASA Langley's many wind tunnels. Models of various sizes and materials underwent testing for ground effects, dynamic stability, and aerodynamic and aerothermodynamic properties. The wind tunnel tests provided information about how each vehicle's design performed aerodynamically over a range of speeds from takeoff to 15 times the speed of sound (Mach 15).

Structures and materials that will be used to build the X-33 and X-34 are also being tested at Langley, using loads that simulate the conditions the RLVs will experience during launch.

NASA's Marshall Space Flight Center in Huntsville, Ala. manages the ASTT Program. The ASTT Program is a partnership among NASA, the U.S. Air Force and private industry to develop world leadership in low-cost space transportation.