The Hyper-X program aims to significantly expand the boundaries of air-breathing flight by being the first to fly a "scramjet" powered aircraft at hypersonic speeds. 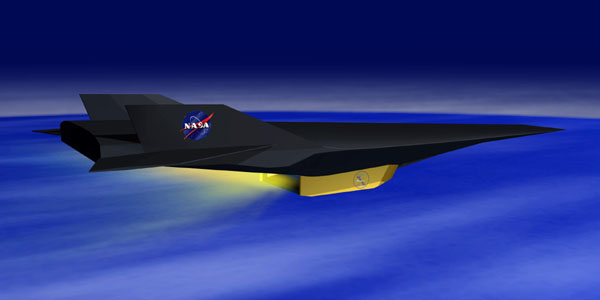 The program's X-43A research vehicle attempted its first flight on June 2, 2001. It was unsuccessful due to a rocket booster failure. A thorough investigation has been completed and analyzed in preparation for the next flight scheduled for the March 2004 timeframe. Assuming a successful reflight, it will mark the first time a non- rocket, air-breathing scramjet (supersonic-combustion ramjet) engine has powered a vehicle in flight at hypersonic speeds ­ speeds above Mach 5 or five times the speed of sound. Mach 5 is equivalent to about one mile per second or approximately 3,600 miles per hour at sea level and far faster than any air-breathing aircraft has ever flown.

As envisioned, payload capacity will be increased by discarding the heavy oxygen and associated tanks that rockets must carry by using a propulsion system that uses the oxygen in the atmosphere as the vehicle flies at many times the speed of sound. Hydrogen will fuel the program's research vehicles, but it requires oxygen from the atmosphere to burn.

The seven-year, approximately $230 million Hyper-X program is aimed at providing unique "first time" data on hypersonic air-breathing engine technologies that have large potential pay-offs. Because it is attempting challenging things that have never been done before, Hyper-X is inherently a high-risk program. For example, no vehicle has ever flown at hypersonic speeds powered by an air-breathing scramjet engine. In addition, the rocket boost and subsequent separation from the rocket to get to the scramjet test condition have very complex elements that must work properly for the mission to be successful. Careful analyses and design have been applied to reduce risks to acceptable levels; however, some level of residual risk is inherent to this program.

Hyper-X research began with conceptual design and wind tunnel work in early 1996. A team led by ATK GASL (formerly MicroCraft, Inc.), Tullahoma, Tenn., built three unpiloted X-43A research aircraft, with extensive contributions by Boeing Phantom Works, Huntington Beach, Calif. Each vehicle is designed to fly once. The lifting-body aircraft are identical in appearance but are engineered with slight differences simulating engine inlet variable geometry, generally a function of Mach number. The first and second vehicles were designed to fly at Mach 7 and the third at Mach 10. At Mach 7 ­ or 7 times the speed of sound ­ the 12-foot-long, 5-foot-wide aircraft will be traveling at about 5,000 miles per hour. 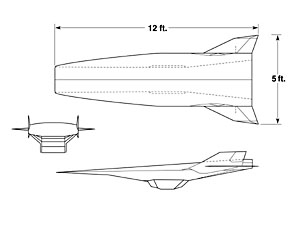 Each X-43A will ride on an Orbital Sciences Corp. booster rocket, which will be released by a NASA B-52 aircraft. For each flight, the role of the booster is to accelerate the Hyper-X research vehicle to the test conditions at approximately 100,000 feet, where it will separate from the booster and fly under its own power and preprogrammed control.

The Hyper-X research vehicle will be separated from the booster rocket by two small pistons. Shortly after separation, the Hyper-X scramjet engine will operate for ten-plus seconds to demonstrate forward thrust in flight.

When the scramjet engine test is complete, the vehicle will go into a high-speed maneuvering glide to collect up to six minutes of hypersonic aerodynamic data while flying to a mission completion point in the Naval Air Warfare Center Weapons Division Sea Range off the southern coast of California. 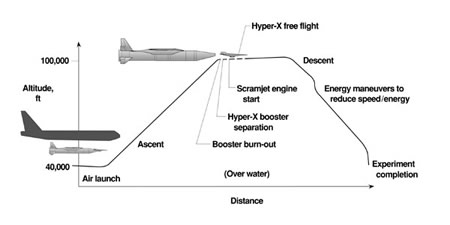 Graphic above shows the simplified flight trajectory. Each of the Hyper-X research vehicles will achieve test speed and altitude with the help of the NASA Dryden B-52 aircraft and an expendable booster rocket.
Image available at: Multimedia Repository | High-res TIF (17.2MB) | Credit: NASA

Vehicle and engine ground tests and analyses are being performed prior to each flight in order to reduce technical risk and to compare with flight test results. Before the first flight, this included a spare flight engine which was mounted on a wind tunnel model that accurately represents the size and shape of the full-scale vehicle. Tests verified the ramjet/scramjet propulsion system operability and performance at Mach 7.

The first flight of the 12-foot long X-43A was in June 2001. For this flight, the booster rocket was to accelerate to Mach 7 and release the research vehicle at an altitude of 95,000 feet. From that point, the X-43A would have operated its scramjet for 10 seconds, traveling 400 miles before landing in the ocean.

The investigation of the 2001 mishap has been completed. The investigation consisted of in-depth evaluations of the booster and vehicle system models and tools as well as extensive system and subsystem analyses. Additional flight hardware and wind tunnel testing were also performed.

Although no single contributing factor was found, the root cause of the problem was identified as the flight control system of the booster. The booster failed due to inaccurate design models, which overestimated the capability of the flight control system to operate satisfactorily within the predicted flight conditions. Numerous actions have been taken to correct problems identified and further reduce risk for the next flight, scheduled for the March 2004 timeframe.

For the reflight, there are several subtle changes. The B-52 will carry the booster and mated X-43A to 40,000 feet before its release, versus the 23,000 feet of the first attempt. Release at the higher altitude is closer to that used for the standard Pegasus launch vehicle which is the basis for the booster. This will help reduce atmospheric loads on the booster's control surfaces. The booster will carry the X-43A research vehicle to approximately the same test conditions ­ altitude and speed ­ as planned for the first flight. 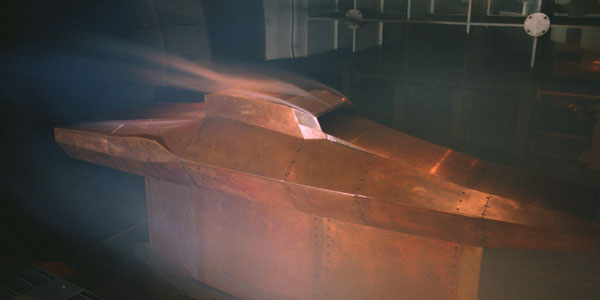 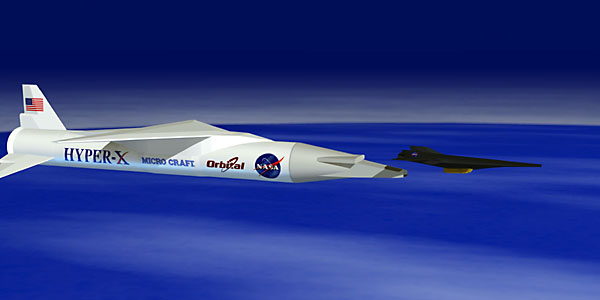 This challenging ground and flight research program will significantly expand the boundaries of air-breathing flight by being the first to fly a "scramjet" powered aircraft at hypersonic speeds.

Demonstrating the airframe-integrated ramjet/scramjet engine tops the list of program technology goals, followed by development of hypersonic aerodynamics data and validation of design tools and methods for air-breathing hypersonic vehicles.

A ramjet operates by subsonic combustion of fuel in a stream of air compressed by the forward speed of the aircraft itself, as opposed to a normal jet engine, in which the compressor section (the fan blades) compresses the air. Ramjets operate from about Mach 3 to Mach 6. A scramjet (supersonic-combustion ramjet) is a ramjet engine in which the airflow through the whole engine remains supersonic. Scramjet technology is challenging because only limited testing can be performed in ground facilities. Hyper-X will build knowledge, confidence and a technology bridge to very high Mach number flight.

Image to right is the X-43 Mission Logo