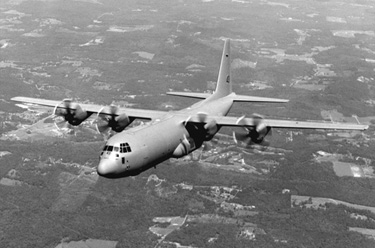 The C-130J is one of the most advanced airlifters ever built. Lockheed Martin
drew heavily from NASA aerospace technologies in this significant updating of
the venerable aircraft.

The new C-130J is more than an evolutionary leap. It was developed in response to Air Force concerns about the growing cost of operating its older tactical airlift fleet and from a desire to take advantage of technology that could offer significant operational leverage in supporting combat forces at the point of attack. The "J" introduces new technologies and designs that will significantly reduce the life-cycle cost of operating the aircraft while dramatically improving overall system reliability. These new technologies will make aircraft maintenance simpler and far less frequent than earlier generations of this same aircraft. At the same time, the C-130J offers significant operational and performance advancements that do not exist in other airlift aircraft. These dramatic improvements, in no small part, are the result of NASA research programs. 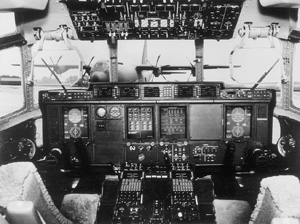 The C-130 was one of the first production aircraft to test composite structures as part of its design. In the 1970s, research done at NASA Langley led to the development and installation of boron-reinforced, center-wing structures for the C-130. This project offered to increase fatigue life and reduce the weight of the wing structure. In the 1980s, follow-up work between NASA and Lockheed Martin resulted in an Advanced Composite Technology program that further redesigned and strengthened the center wing box of the C-130. In addition, a series of long-term NASA-Lockheed Martin contracts for constructing analytical tools and validating structural designs have been important to developing the aircraft's propellers, trailing wing edges and flap sections. The company has used research from NASA computer modeling efforts to develop software for design and structural analysis for all its composite structures work.

The relationship between NASA and Lockheed Martin predates even the earliest production C-130s. The basic airfoil and empennage designs were developed by NACA, the predecessor of NASA. From the mid-1960s to the late-1980s, NASA Dryden conducted a series of projects using a Lockheed JetStar aircraft to study wing laminar flow in an effort to design more efficient wing structures. Lockheed Martin has used this work in virtually all of its aircraft designs including the C-130. The same JetStar aircraft was also used to examine acoustics characteristics for a series of advanced propeller designs which featured the curved blade similar to that used on the C-130J. Those tests, with other NASA technologies, have been used extensively to predict and manage interior and exterior noise for each of the C-130 models. In addition, effective analytical tools and techniques contributed by NASA have been critical to maintaining the long productive life of the C-130 series.

NASA contributed technology concepts in the areas of externally blown flaps, ducted propellers and over-wing blowing to help C-130 designers maintain an operational advantage in short field takeoff and landing. In the late 1950s and early 1960s the company built, and NASA Ames tested,a specially configured C-130 with aerodynamic boundary layer control to explore a higher-lift wing flap design. The design reduced takeoff andlanding speeds to less than 80 mph, shortening ground run distances. This early demonstration proved conclusively that larger transport aircraft were capable of short takeoff and landing (STOL) performance. NASA continued to use this specially configured C-130 as a flying laboratory to explore other aerodynamic concepts. In a follow-on project in the late 1970s, another collaborative effort produced two special-mission C-130s which incorporated additional aerodynamic technologies resulting in "super STOL" aircraft that could takeoff and land in less than 500 feet. Building on lessons learned, Lockheed Martin modified a commercial variant of the C-130 into a High Technology Test Bed. This test aircraft set numerous short takeoff and landing performance records and significantly expanded the database for future derivatives of the C-130. In a related program, NASA and Lockheed Martin were awarded the Collier Trophy for developmental flight testing of an unducted propeller in the Propfan Test Assessment (PTA) program led by NASA Lewis and supported by Langley, Ames and Dryden. This effort validated the technology applied by Dowty Aerospace Propellers, UK, in designing the advanced propellers used on the new C-130J. 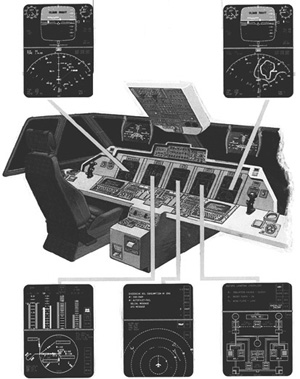 Nearly identical advanced concepts flight simulators at Lockheed
Martin (Marietta), Ames and Langley, like the artists concept above,
contributed to technologies for the radically-redesigned C-130J cockpit.

Lockheed Martin, in partnership with NASA, built three advanced flight simulators, one each for Ames, Langley and its own Marietta, Ga., facility. The simulators were instrumental in developing core head-up display (HUD) technologies used in the C-130J. This new HUD system has been certified by the FAA as a primary flight display in the "J" and is a first-of-a-kind in the airlift world. Another offshoot of these flight simulator programs is the aircraft's new integrated "glass cockpit," featuring liquid crystal flat-panel displays developed from basic research under NASA Langley contract. 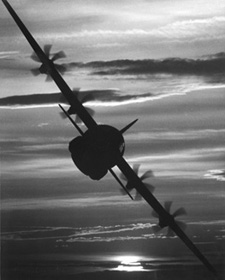 The C-130's rugged construction and excellent short-field
performance has made it the aircraft of choice for roles ranging
from humanitarian relief to full-scale combat operations.

From the C-130's beginning design in the early-1950s until today, NASA research and technology has played an important part in the life of the Hercules. The new C-130J is a direct inheritor of the legacy of cooperative advancement between NASA and Lockheed Martin. In September 1998, the FAA certified a commercial version of the C-130J. Today, the C-130J is being delivered to the Royal Air Force, followed later in the year by deliveries to the U.S. Air Force and next spring to the Royal Australian Air Force. Deliveries to the Italian Air Force begin in 2000.

Lockheed Martin flew its new C-130 model to NASA Langley
as a symbolic thanks for NASA technologies that the company
has incorporated over the life of the aircraft series. In a
ceremony honoring all four NASA research centers, company
official James Blackwell said the C-130J is evidence of "a
fruitful partnership between NASA and industry."

More information is available from these NASA public affairs offices: