Aeronautical concepts conceived at NASA in the last four decades have been incorporated into the military's next generation of jet transports, including the Air Force's McDonnell Douglas C-17 Globemaster III.

The C-17 has performance characteristics that distinguish it from its predecessors, including long-range capability, outstanding aerodynamic efficiency, ease of ground operations, heavy cargo payload capability, and ability to perform extensive airdrops over hostile territory and make precision landings and takeoffs from short or makeshift runways.

"The C-17 is the right airplane at the right time," said Norbert Smith, a McDonnell Douglas senior manager. "It's an airlifter that our deployed forces will get much use from, as demonstrated at Tuzla Airfield in Bosnia. It has today's technologies and will take the Air Force into new concepts in operations and deployments well into the future.

"With the C-17," Smith said, "both the Air Force and McDonnell Douglas have benefited significantly from the contributions of NASAͳ innovative technology applications." The C-17 program is a prime example of the often-lengthy aerospace technology maturation process ܠthe time it takes for technology concepts to reach an operational hardware status. The Defense Department launched its Cargo-Experimental (C-X) program in 1979, and the Air Force selected McDonnell Douglas as the manufacturer of the envisioned C-17 in 1981. The company used the NASA-derived technologies that had been made available to industry in the last four decades. The first C-17 rolled off the assembly line in 1991. 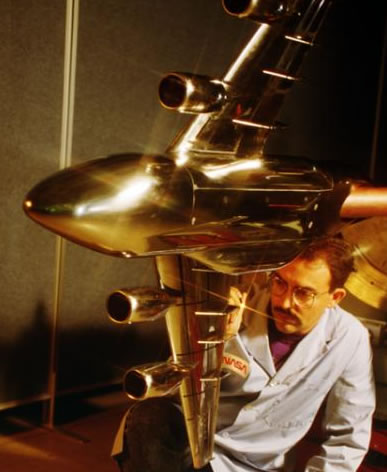 A key element of the aircraft is a flap system developed by a team of researchers at NASA Langley Research Center in the mid-1950s. The "externally blown flap" or "powered-lift system" enables the airplane to make slow, steep approaches with heavy cargo loads. The steep approach helps pilots make precision landings with the aircraft, touching down precisely in the spot desired on limited runway surfaces. This was accomplished by diverting engine exhaust downward, giving the wing more lift. In the flap system, the engine exhaust from pod-mounted engines impinges directly on conventional slotted flaps and is deflected downward to augment the wing lift. This allows aircraft with blown flaps to operate at roughly twice the lift coefficient of that of conventional jet transport aircraft. The concept was studied extensively in Langley's wind tunnels, including tests of flying models in the 30 x 60-Foot Tunnel. The flap, which is patented, has been applied to models of jet transports with both conventional and swept wings.

Flight Controls & Displays Included in the Air Force procurement specification for the C-17 was Short Takeoff and Landing (STOL) capability -- the ability to take off and land on short runways. Research aimed at this capability was conducted on flight simulators and the Augmentor Wing Research Aircraft at NASA Ames Research Center in Mountain View, Calif. During the development program, McDonnell Douglas conducted simulations on the Vertical Motion Simulator to develop the C-17 flight control system and head-up display. Ames performed flight demonstrations with the Quiet Short Haul Research Aircraft (QSRA) to show the Air Force and McDonnell Douglas design features of the flight control system and head-up display. The features would provide precision-approach path control and accurate landing performance for the C-17.

Results of the flight demonstration were applied to the design of the aircraft's spoiler control system and flight-path symbology on the head-up display to achieve the anticipated improvements. Ames provided the Air Force and McDonnell Douglas with information on wind shear response and control techniques that were investigated in STOL simulations. The techniques have been incorporated by the Air Force in C-17 operating procedures. Finally, Ames extensively briefed the Air Force on aerodynamic performance, stability and control, flying qualities, augmented control and displays and flight test techniques for powered lift aircraft to prepare for the C-17 flight test program.

Like other military transports, the C-17 uses a "supercritical" wing. These are advanced airfoil designs that enhance the range, cruising speed and fuel efficiency of jet aircraft by producing weaker shock waves that create less drag and permit high efficiency. This major innovative technology was conceived through NASA Langley wind tunnel research in the 1960s. The agency researched the idea in actual flight in an F-8A at NASA Dryden and later on an F-111 aircraft.

Photograph above is an Air Force photo. TA Bradley Fighting Vehicle is unloaded from a Charleston Air Force Base, S.C., C-17 at Tuzla Airfield, Bosnia-Herzegovina.

In the mid-1970s, NASA Langley developed the winglet concept through wind tunnel research. Winglets are small, winglike vertical surfaces at each wing-tip of an aircraft that enable the airplane to fly with greater efficiency. They curve flow at the wingtip to produce a forward force on the airplane, similar to the sail on a sail boat. The concept was first demonstrated in-flight on a corporate Gates Model 28 Longhorn series Learjet, and further tested on a large DC-10 aircraft as part of the NASA Aircraft Energy Efficiency (ACEE) Program. Winglets were installed on a KC-135A tanker on loan from the Air Force and flight tested at NASA Dryden in 1979 and 1980. Eventually, winglets were applied to the C-17.

Another NASA contribution to the C-17 was fly-by-wire flight-control technology, a lower volume, lightweight replacement for hydraulic control systems. This developed from the F-8 digital fly-by-wire program that began at Dryden in the 1960s. In a flight research program that began in 1972, Dryden demonstrated the feasibility of the concept, and digital fly-by-wire technology was first used on a production aircraft -- the F-18 -- in 1978. Since then it has been incorporated into many other aircraft, including the C-17.

NASA Lewis and the Energy Efficient Engine Program contributed technologies to the F117-PW-100 (PW2037) engines on the C-17. These technologies led to improved performance and efficiencies of the fan, compressor and turbine components and overall superior fuel consumption for this engine.

NASA Langley played a major role in developing composites technology incorporated on components of the C-17 design. Sixteen-thousand pounds of composite materials have been applied to the aircraft. Several of the major control surface and secondary structural components of the C-17 are made of composites. The most direct contribution to C-17 applications was the development of the DC-10 graphite-epoxy upper aft rudders. These rudders have accumulated more than 500,000 flight hours since they were introduced into regular airline service in 1976. The high-time rudder alone has flown for 75,000 hours. The control surfaces of the C-17 follow the same multi-rib configuration as the DC-10 rudders.

Recently, McDonnell Douglas was recognized for the innovative nature and soundness of the C-17 design when it received the Collier Trophy for 1994, U.S. aviation's greatest annual achievement award.

More information is available from these NASA public affairs offices: