NASA's B-737 Flying Laboratory
From 'Glass Cockpits' to Windshear Detection

Since it first entered the NASA inventory in 1974, NASA 515 has been a testbed for research into a multitude of issues affecting aircraft safety, efficiency and capacity. Called an "airborne trailblazer,"it goes beyond the typical research facility in that it demonstrates new concepts in real-world situations. For example, government and industry decision makers could observe - first-hand - research pilots using innovations in computer-generated display formats content while interacting with air traffic control it in a busy terminal area. Other observers experienced flying through potentially hazardous windshells to prove that advance-warning devices really can give pilots precious extra seconds to avoid hazardous weather.

As a result, this flying laboratory and its supporting facilities have been responsible for rapid adoption of new aviation technology by U.S. industry.

NASA 515 is the first B-737 built. First used by Boeing to qualify the 737 for airline service, the prototype 737 has since been heavily modified by NASA. It has two separate cockpits - a conventional B-737 forward cockpit providing operational support and safety backup, and an operational research flight deck positioned behind in what was the aircraft's first-class cabin section. 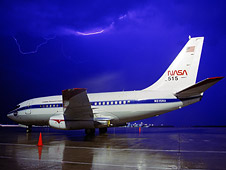 NASA Langley Research Center's 737 'flying laboratory' flight tested three advance warning windshear sensors. The laser beams seen in the photograph were used to align the optical hardware of the infrared (located in front of the windows) and LIDAR (Light Detecting And Ranging) systems. In addition, a microwave doppler radar system is installed in the aircraft nose. Credit: NASA 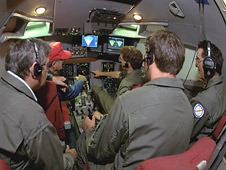 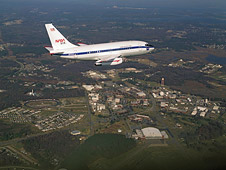 Well Traveled. NA5A 515 posed for this picture over NASA Langley Research Center in 1989. The 737 has taken part in flight research in states in this country, in Canada and in South America. Credit: NASA 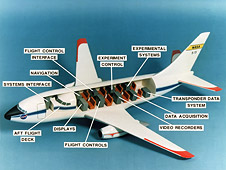 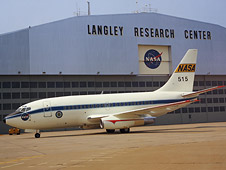 With a length only one foot greater than its wingspan, the stubby aircraft earned the nickname, "Fat Albert." Credit: NASA

NASA B-737 FACTS AND FIGURES
THE PROTOTYPE BOEING 737

TECHNOLOGY TRANSFER LESSONS
'Getting personal' and 'seeing is believing'

In the 1994 book, Airborne Trailblazer: Two Decades With NASA Langley's 737 Flying Laboratory, author Lane E. Wallace recounts some "technology transfer myths," which include the idea that industry automatically "gobbles up" new technology as soon as it is received; that a "better mousetrap" is self-evident and doesn't need setting, and that "exciting and valid" technology will "automatically" be transferred.

The reality, she explains, is that there are many factors that complicate and influence the transfer of technology from government research institutions like NASA to industry.

Forces that had little to do with the intrinsic worth of the concepts researched through the Langley B-737 flight research program had a tremendous impact on the eventual application of those technologies in commercial products. New ideas face a human and organizational tendency to resist change, and as companies grow in size, effectively communicating information about new innovations to all the necessary players becomes more difficult.

As new technology becomes more expensive to produce and incorporate into aircraft designs, it has to "earn its way" onto airplanes more than it has in the past. In other words, technological innovations have to of significant economic or other tangible benefits to be incorporated into new airliners.

Gone are the days when successful technology transfer is as simple as writing a report on research results after the work is completed. There is a growing consensus, according to Wallace, that technology transfer efforts stand a much better chance of success if they occur as a part of the technology development process, through personal contact between NASA and industry engineers.

By involving industry earlier in the process, NASA Langley B-737 program managers have helped insure that their efforts are relevant to industry's needs. Also, flight testing new concepts on the airplane has provided unassailable proof that the technology will work.

For instance, what made the 1989 B-737's GPS guided auto-land flights so significant was not the technical performance of the system, but the fact that the airplane had actually completed automatic landings using satellite-based global positioning system (GPS) technology. The fact that the system used on-board radar to meet low-visibility landing criteria was secondary. The NASA-industry flight tests abruptly ended the debate about whether a GPS auto-land was possible, and refocused the discussion and further research on what level of accuracy the technology could attain.