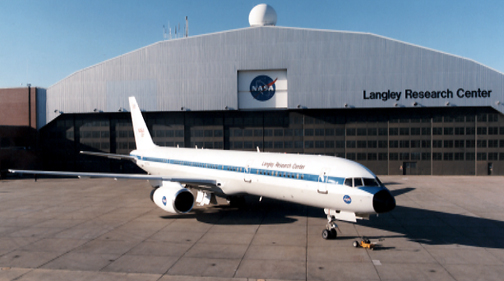 A Boeing 757-200 aircraft obtained by NASA in 1994 is now serving as a "flying laboratory" for aeronautical research. The aircraft is being modified extensively for a broad range of flight research programs in the next 20 years to benefit the U.S. aviation industry and commercial airline customers. Called ARIES, or Airborne Research Integrated Experiments System, the aircraft is being used to conduct research to increase aircraft safety, operating efficiency and compatibility with future air traffic control systems. It is a vital research tool in support of the agency's Aviation Safety and Aviation Systems capacity programs.

The 757 is continuing work begun by the NASA 737-100 in state-of-the-art technologies such as electronic cockpit displays, flight management systems and flight safety devices. The 737, the first off Boeing's production line in 1967, was decommissioned in 1997.

Current and projected research needs greatly exceeded the capabilities of the 737. The 757 is a more modern airplane that utilizes electronic systems to a much greater extent in this growing electronic age. The 757 will better support research and development of the aeronautical sub-systems for the airlines and the airframe and systems manufacturers. Already the airplane has been used for several research programs, including:

Future research will focus on technologies to improve air safety and efficiency, including:

The NASA 757 was located after an extensive survey of the jet airliner market. It was the second 757 built and the first one produced that was sold to an airline. The first 757 is owned by Boeing. The airplane now at Langley had been used by Boeing for Federal Aviation Administration certification of the 757 class of jet airliners.

The 757, maintained and flown by NASA's Langley Research Center in Hampton, Va., is an integral part of the Transport Research Facilities (TRF). The TRF is a set of tools used in a simulation-to-flight concept. This concept incorporates common software, hardware, and processes for both ground-based flight simulators and the 757, providing government and industry with an efficient way to develop and test new technology concepts to enhance the capacity, safety, and operational needs of the ever-changing national airspace system.

Facilities used in the simulation-to-flight concept are: