Advanced aerospace vehicles are key to national security, transportation, mobility, freedom, and our quality of life. The answer to ensuring the continued viability of aviation is not through evolutionary or near-term approaches alone, but through careful development of revolutionary, long-term approaches utilizing emerging technologies. The significant advances in biotechnology, nanotechnology, and information technology are opening the door to a new era in aircraft development resulting in designs that will be radically different from today's aircraft.

Aircraft of the future will not be built of traditional, multiple, mechanically connected parts and systems. Instead, aircraft wing construction will employ fully integrated, embedded "smart" materials and actuators that will enable aircraft wings with unprecedented levels of aerodynamic efficiencies and aircraft control.

Able to respond to the constantly varying conditions of flight, sensors will act like the "nerves" in a bird's wing and will measure the pressure over the entire surface of the wing. The response to these measurements will direct actuators, which will function like the bird's wing "muscles." Just as a bird instinctively uses different feathers on its wings to control its flight, the actuators will change the shape of the aircraft's wings to continually optimize flying conditions. Active flow control effectors will help mitigate adverse aircraft motions when turbulent air conditions are encountered.

Intelligent systems composed of these sensors, actuators, microprocessors, and adaptive controls will provide an effective "central nervous system" for stimulating the structure to effect an adaptive "physical response." The central nervous system will provide many advantages over current technologies. Proposed 21st Century Aerospace Vehicles will be able to monitor their own performance, environment, and even their operators in order to improve safety and fuel efficiency, and minimize airframe noise. They will also have systems that will allow for safe takeoffs and landings from short airfields enabling access to this country's more than 5,400 rural/regional airports.

Researchers at NASA Langley Research Center are taking the lead to explore these advanced vehicle concepts and revolutionary new technologies. New analysis methodologies are being formulated to model and predict the best locations for sensors and actuators. Cooperative ventures with industry and other government agencies will be key to the project. Specific technology areas of study include ground-to-flight scaling, reliability-based design, adaptive flow control, robust controls, and autonomic vehicle functions. 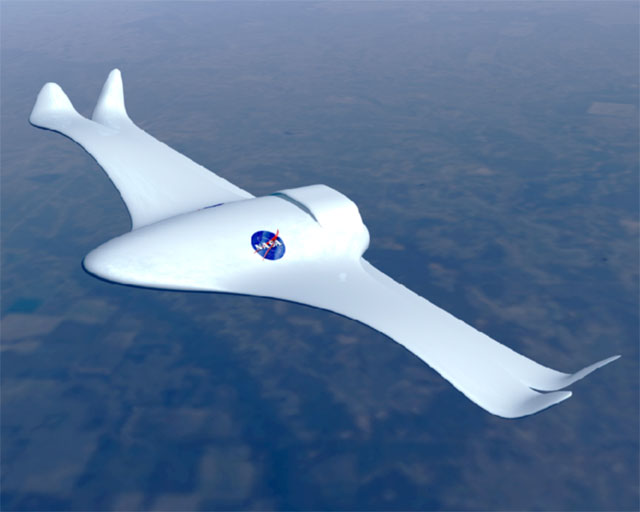 Image above depicts an artisit's rendering of new aircraft in flight.

NASA's incorporation of these new technologies, research methods and the human creative and exploratory spirit are rapidly changing the way we think about air transportation and will continue to expand the horizon of an already exciting future.