Grow Text SizeShrink Text Size
NASA Corn Maze Crop Circles Across the Country
If you happen to fly over the right part of the country in the next few weeks, you could be treated to an amazing sight -- corn mazes carved in farm fields, each depicting a different NASA theme. 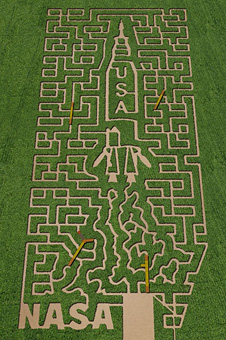 Seven farms across the U.S. are taking part in a project called Space Farm 7, collaboration between NASA and members of The MAiZE Inc., a Utah-based company that helps farmers design and create the mazes.

The organization creates mazes each year, and this time decided to spotlight NASA, said Kamille Combs, marketing director for The MAiZE.

"The goal with our mazes is always to share a message with the people coming to visit us. The interest was in honoring NASA this year," she said. "We knew there was a lot of interest and buzz around the last shuttle launch, the 50th anniversary of NASA, of the first man in space."

NASA is supporting the project with exhibits, speakers and an online national contest where winners earn a visit to Kennedy Space Center and the chance to dine with an astronaut. To enter, visit www.spacefarm7.com and vote on your favorite of the seven maze designs. A winner will be randomly selected at the end of October.

The mazes are about eight acres in size. The following are locations, opening dates, NASA affiliations, and web sites:
Combs said the type of farms taking part special in "agritourism," combining farming with public events.

"It's farmers who, in many cases, have done professional farming and have struggled with that," she said. "Rather than giving it up, they are bringing people into their farms with attractions to entertain and education, like corn mazes, hay rides, cow trains, corn cannons, pumpkin blasters."

Farm owners provide The MAiZE Inc. with ideas for a maze and the company designs them, Combs said. A maze typically is created using a GPS-guided tractor that sprays a weed-killer while tracing the design early in the corn season.