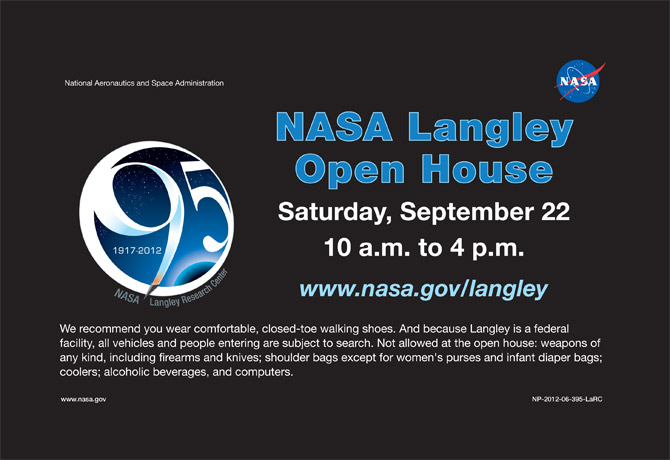 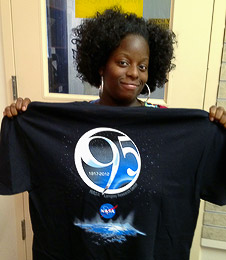 Melisa from the NASA Exchange models an Open House t-shirt. These shirts will be for sale in the NASA Gift Shop. Credit: NASA

What You Need to Know...

Date: Saturday, September 22, 2012
Time: 10 a.m. to 4 p.m.
What: NASA Langley Research Center Open House. See the latest cool stuff Langley is working on, talk with researchers and take part in hands-on activities related to science, technology, engineering and math. You can also be able to see some of the historic landmarks that made Langley famous in the 95 years since we were created as the nation's first civilian aeronautics research lab.
Food & Drink: The NASA Langley Cafeteria and Gift Shop will be open from 10:30 a.m. to 2:30 p.m. The menu includes cold and hot sandwiches, fries, snacks, chicken tenders, premade salads, vegetarian sandwiches, and ice cream.
Connect: If you'd like to talk about the Open House or share your experience and pictures from the event in real time, our Twitter ID is @NASA_Langley and our Facebook page is facebook.com/nasalarc. Look us up!
› Directions
› Questions?
› More About NASA Langley 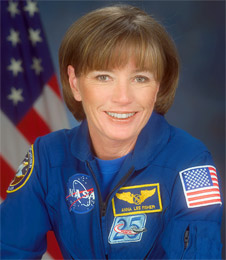 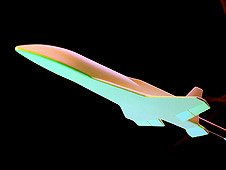 A ceramic aerothermodynamic heat transfer model of the X-34 is being prepared for testing in the 31-Inch Mach 10 Wind Tunnel. Credit: NASA

Spacecraft Entry Heating
Spacecraft entry heating was recently described on the successful Mars Science Laboratory (MSL) mission as "seven minutes of terror." Engineers and technicians in Langley's Research Directorate predict how hot a vehicle will get during entry into a planet's atmosphere using computer predictions, flight tests, and experiments in high speed facilities like the 31-Inch Mach 10 Tunnel (78.74 cm).

Did you know?
The 31-Inch Mach 10 Tunnel is NASA's premiere facility for assessing spacecraft heating. It provides 1,400-degree (760 degrees Celsius) air flowing 10 times the speed of sound (3,200 miles per hour, or 5,150 kilometers per hour) over a wind tunnel model. It was commissioned during the Apollo Program in the mid 1960s and still provides critical information for the nation's spacecraft. 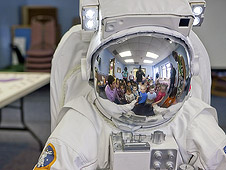 On the grounds, take a break in the tent and listen to live music provided by the Air Force Brass Band, some local high school jazz musicians and some talented Langley people. 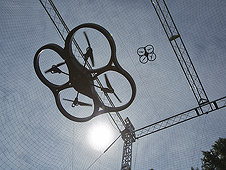 Did you know?
The AVR was envisioned as an area where innovative air traffic management tools could be tested, but it has found other uses. In 2012, the lab was used to test new vertical take-off and landing (VTOL) aircraft designs and there are plans to test robotic systems designed for space exploration. 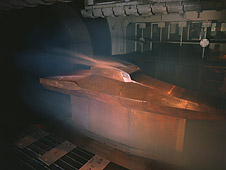 Did you know?
This tunnel provides air flow at speeds up to Mach 7, or one and a half miles per second. There is no bigger and faster high-temperature facility anywhere in the world. 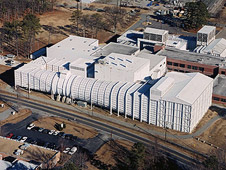 An aerial view of the 14- by 22-Foot Subsonic Tunnel complex. Credit: NASA

Did you know?
One of the carts used to support models in the test section can weigh as much as two fully-loaded fighter aircraft (84,000 lb, or 38,102 kg). 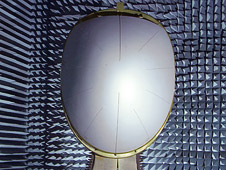 Electromagnetic testing being performed on antennas inside a C-17 radome. Credit: NASA

Antenna Research Facility
Electromagnetic waves, such as radio and light, are integral components of modern aerospace systems. Researchers in this facility design and develop advanced electromagnetic technologies that are used on most commercial and some military aircraft, as well as NASA spacecraft.

Did you know?
Nearly every commercial radar being flown today, including those on the aircraft in which you travel, had its prototype design developed by researchers and tested in this facility. 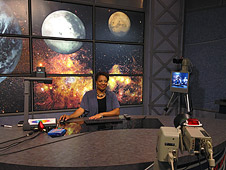 Did you know?
NASA's DLN won the 2012 Platinum Award for Excellence in Distance Learning Programming from the United States Distance Learning Association, the largest and most well-known distance learning professional organization in the world. 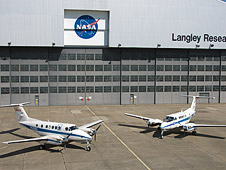 Flight Research Hangar
The NASA Langley Flight Research Hangar houses the Center's flight assets and the associated personnel. The Hangar has 85,200 square feet (7,915 square meters) of open hangar space and large door dimensions allow for entry of big aircraft such as Boeing 757s and other commercial or military transport-class aircraft.

Did you know?
The Gemini Rendezvous Docking Simulator used by Gemini and Apollo astronauts to practice docking space capsules with other vessels is still suspended from the hangar bay ceiling. It is a National Historic Landmark. 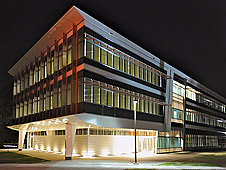 Did you know?
The building was awarded a Leadership in Energy and Environmental Design platinum certification (the highest category) by the U.S. Green Building Council. 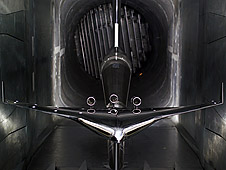 A Blended Wing Body model being tested in the NTF. Credit: NASA

Did you know?
It's not just aerospace structures that are tested in the National Transonic Facility; a Sea Wolf Submarine has been evaluated here as well. 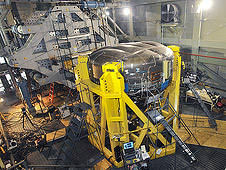 Did you know?
Future designs for supersonic transport vehicles, commercial aircraft and manned spacecraft have all been tested at the COLTS facility. 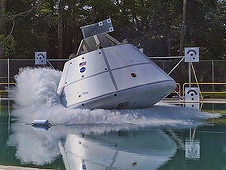 Landing and Impact Research Facility
Researchers at this facility conduct landing and impact tests of aircraft and space vehicles onto concrete, soil and water surfaces. The test data is used to improve occupant safety.

Did you know?
This facility was designated as a National Historic Landmark due to its contributions to the Apollo Moon Landing Program. Approximately 25 astronauts trained at the facility to practice the last 150 feet (46 meters) of landing on the moon. 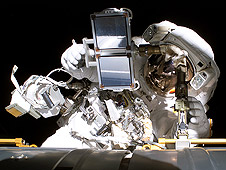 Nondestructive Evaluation
The 30 members of the Nondestructive Evaluation Sciences Branch are a mix of scientists, engineers and technicians with diverse backgrounds in experimentation, computation and physics-based modeling. We investigate the interactions of energy with materials and structures in order to extract useful information on their physical, chemical, mechanical or metallurgical state, without damaging the test object (i.e., nondestructive evaluation) to address critical NASA needs in aerospace applications.

Did you know?
Langley's Nondestructive Evaluation Sciences Branch continues to be the only branch level organization for nondestructive evaluation within NASA. 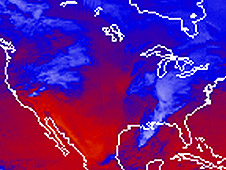 Science Directorate
For more than 30 years, the Science Directorate at Langley Research Center has conducted pioneering research. We've managed and mined our vast data sets to understand how the Earth's atmosphere is changing -- and how that affects things like public health, air quality and national security. From the air, land and space, we study climate change, the quality of the air we breathe, the depletion of the ozone layer, and many other aspects of the environment we all inhabit.

Did you know?
The Science Directorate is home to world-renowned researchers and our data is used to help solve some of Earth's biggest problems. We have had five researchers contribute to the United Nations International Panel on Climate Change assessment reports, which represent the largest and most detailed international assessment of climate change from a technical, scientific and socio-economic perspective. 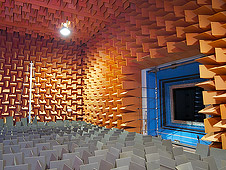 Acoustics Laboratory
In this facility, aerospace engineers research acoustics to understand and reduce noise associated with all kinds of aircraft, including jets, helicopters, propellers, and supersonic transports.

Did you know?
The Acoustics Research Laboratory houses unique experimental facilities that can let you hear what future aircraft will sound like. 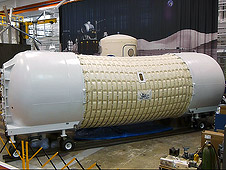 Did you know?
Built in 1939 to help develop and validate aircraft structural designs during World War II, this was the first building constructed on what is now Langley Research Center's main campus. 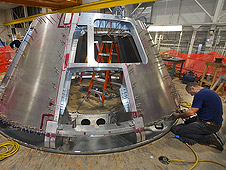 Flight Test Article Development Laboratory
In this lab, flight test articles and mockups are fabricated so that NASA researchers and engineers can perform tests on new designs and, ultimately, ensure the safety of humans in flight.

Did you know?
A rocket Launch Abort System designed to separate the crew module from the launch vehicle in the event of an emergency was fabricated in this facility. The system was successfully tested at the White Sands Missile Range in 2010. 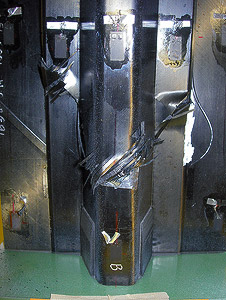 Materials Research Laboratory
Langley researchers use this facility to better understand and improve the durability of structures and materials. The results of this research are used to make current and next generation aircraft and spacecraft safer and more efficient.

Did you know?
An aluminum lithium alloy characterized in this lab led to the redesign of the Space Shuttle external fuel tank to incorporate the material, significantly reducing weight and operating costs.
› Back To Top