Grow Text SizeShrink Text Size
NASA Art Contestants Lasso Their Imaginations to the Moon
On your way home, you find it a little hard to breathe. Your breathing becomes shorter as your heart rate gets faster. Come to find out, your personal oxygen tank is low, so you stop at the oxygen station to get a refill, just to be on the safe side. As you are filling your oxygen tank, you talk with the person next to you about the craters around your home, meteor showers and the latest gossip of life on earth. 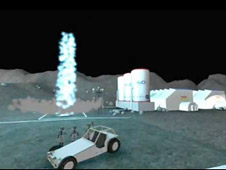 Once you fill your tank, your heart rate and breathing return to normal. You get home, call it a day, and buckle up in your bed near the ceiling to get a good night's rest.

Scenarios like this are what more than 200 college and high school students thought of when creating art and design entries to submit to NASA's "2010 Life and Work on the Moon Art and Design Contest." This may seem like a simple theme to apply when creating original artwork, but it was not as easy as one would think for these talented students.

Not only did they need to imagine and create original art related to life and work on the Moon, but the art needed to portray life that could survive the Moon's harsh conditions. Students needed to ask themselves, what would fuel a spacecraft, what types of food would people eat, how would there be enough oxygen, and many more questions like these.

Students expressed their creativity and innovation pertaining to life and work on the Moon through many categories, including two-dimensional, three-dimensional, digital art, music, literature and video. 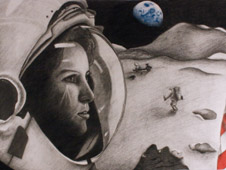 Graphite and color pencil drawing plus original music, "Beyond the Atmosphere," by Mitchell Peterson

"Offering students the opportunity to express themselves through art allows us to reach out to people who otherwise might not be able to participate in our program of exploration," said Jerry Hartman, Education Lead for the Exploration Systems Mission Directorate at NASA Headquarters. "Plus, the young people come up with a lot of cool stuff!"

A panel of scientists, professional artists and educators from the U.S. and other nations reviewed and judged the students' artwork. Judges based their reviews on three elements. The first was an artist statement that described what inspired the student, what artistic media they chose and why. Second was creativity and artistic expression. The third category and the hardest to judge was the validity of a realistic situation for the Moon's harsh conditions.

Jim Plaxco, third year NASA art contest judge, with his own digital art gallery website, Artsnova, describes how judging validity is the most difficult. "In the case of a painting that consists only of a space-suited astronaut walking on the surface of the Moon - does the person really understand that environment?" said Plaxco. "For example, people without spacesuits on the Moon is kind of a dead giveaway."

Overall winner and high school student, Dalton Mills, from La Crosse, Wis., portrayed a great understanding of realistic conditions for life on the Moon when he created his 3-D animated video, "Moonshot." In his video, he included many valid details for living on the moon, such as water tanks, space transportation, a NASA power pressure unit, solar panels and a greenhouse. The displays of a greenhouse and solar panels added a "Go Green" theme. 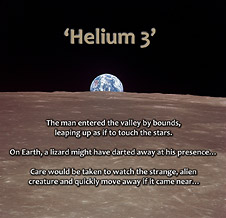 "Three-D art is a hobby of mine," said Mills. "As far as the future, I would like to pursue engineering and physics and freelance my artwork."

Mitchell Peterson, a student from Sheridan College in Wyoming, who received first place for 2-D and music combined, took a different spin on expressing life and work on the moon, by creating a graphite and color pencil drawing with original music, "Beyond the Atmosphere." In his artwork, he added patriotism and color by drawing an American flag. Peterson also included a variety of voice and other sound clips in his original music. For example, he used clips from the Apollo missions and from the movie, "It's a Wonderful Life": "What is it you want? The Moon? Just say the word and I'll throw a lasso around it and pull it down."

"As I was growing up I would watch the movie "It's a Wonderful Life," and I thought it would be cool to put the clip about the moon into the music I was making," said Peterson.

Brennan Barrington, from Licking Heights High School in Pataskala, Ohio, received first place for his short story, "Helium 3." Inspired by Jack London's story, "To Build a Fire," Barrington found it rewarding when he accomplished the challenge of creating a lifestyle relevant to the Moon's conditions.

"It was tricky to get all the details of gravity, how the dust moves, and things that like, but I got it done," said Barrington.

The top cash award was $1,000, with smaller cash prizes for high scores in each category. The top non-U.S. students receive engraved plaques acknowledging their achievement. The winning art will be displayed in NASA facilities and museums around the country. This fall, NASA hopes to continue encouraging creativity through original artwork by changing the challenge of the art contest to reflect new NASA missions.