Grow Text SizeShrink Text Size
NASA, Partners to Test Unmanned Aircraft Technology in N.D.
Researchers at NASA's Langley Research Center have a new twist on an old saying, "Look Ma, no hands," when it comes to piloting a small plane -- thanks to a partnership with The MITRE Corporation and the University of North Dakota (UND). 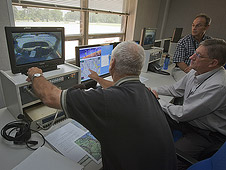 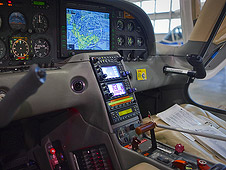 The Cirrus SR-22 is modified to act as an unmanned aircraft. During flight tests software onboard and an experimental auto throttle (bottom right) have allowed the plane to automatically sense and avoid other air traffic. Credit: NASA/Sean Smith 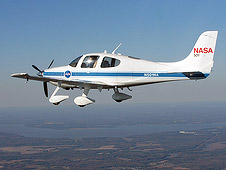 The team is using a NASA Langley general aviation aircraft that was developed as a unique testbed to assess and mimic unmanned aircraft systems. Capitalizing on NASA Langley's years of flight test experience, the Cirrus SR-22 is equipped with special cockpit technology and computer equipment loaded with automatic "sense-and-avoid" software algorithms developed by MITRE and UND.

"The Cirrus SR-22 was a perfect aircraft to develop into an unmanned aerial system surrogate," said Frank Jones, NASA LD-CAP project manager. It already had research equipment installed onboard from a previous project, including data acquisition systems, autopilot, graphical cockpit displays, video capability and computers. After a few additional modifications we can now control the aircraft from onboard computers or from a ground station using radio links."

During a September 2012 flight demonstration at the Grand Forks N.D., International Airport, the NASA Langley aircraft will show how technology onboard can allow it to "sense and avoid" a UND Cessna 172 "intruder" plane, being flown by university instructor pilots. The Cirrus will have a safety pilot in the cockpit, but researchers say three computer programs developed by MITRE and one by UND will automatically fly the plane.

"Unmanned aircraft offer great potential, including remote firefighting, search and rescue and surveillance," said Jones. "But their routine use in civil airspace creates technical, operational and policy challenges. We need to make sure we can safely integrate them into the national airspace and the only way to do this is to collect data to make well-informed decisions."

LD-CAP is trying to address one of the biggest challenges -- the development of a way for unmanned aircraft to sense and avoid other planes to compensate for not having a pilot on board capable of seeing and avoiding other aircraft. Automatic sense-and-avoid software includes the ability to keep aircraft safely separated from one another and to take immediate action to avoid any imminent collisions when the ground-based, remote pilot does not react.

These initial flight tests will validate work done in simulation and help engineers determine how they can design systems so that unmanned aircraft can be safely incorporated into the skies.

Follow-on testing in 2013 is expected to feature additional advanced software by MITRE and UND as well as sense-and-avoid software managed by "Timeliner," a task automation framework developed by Draper Laboratory that is currently in use on the International Space Station.

NASA Langley Research Center
Solving the tough problems in air, space and earth science is what NASA's Langley Research Center in Hampton, Va. has been known for almost since it was established as the United States' first civilian aeronautics laboratory in 1917. Researchers at NASA Langley are focusing on some of the biggest technical challenges of our time: global climate change, access to space, planetary exploration and revolutionizing airplanes and the air transportation system.
› www.nasa.gov/langley

The MITRE Corporation
The MITRE Corporation is a not-for-profit organization that provides systems engineering, research and development, and information technology support to the government. It operates federally funded research and development centers for the Department of Defense, the Federal Aviation Administration, the Internal Revenue Service and Department of Veterans Affairs, the Department of Homeland Security, and the Administrative Office of the U.S. Courts, with principal locations in Bedford, Mass., and McLean, Va. MITRE's participation in the joint LD-CAP research project is being financed by company research and initiative funds.
› www.mitre.org

University of North Dakota Aerospace
The John D. Odegard School of Aerospace Sciences at the University of North Dakota is a world-renowned center for aerospace learning, nationally acclaimed for its achievements in collegiate aviation education, atmospheric research, space studies, earth system science and policy, and computer science applications. With over 500 faculty and staff members, more than 1,500 students from around the world, and myriad programs and projects, the Odegard School is setting the pace for the future of flight.
› aero.und.edu/