Grow Text SizeShrink Text Size
United We Serve — Denise Lineberry
Denise Lineberry, editor for the Researcher News, chose to use her expertise outside of NASA Langley by helping to fight illiteracy in Hampton Roads.

When Lineberry published a children's book, she searched for a non-profit organization that could benefit from its proceeds. She did some research and concluded that First Book would be the perfect organization. 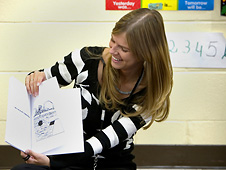 First Book provides new books to children in needs addressing one of the most important factors affecting literacy -- access to books.

"Only one in 300 children in low-income households has an age-appropriate book in his or her home, while in middle income neighborhoods the ratio of books per child is 13 to one," Lineberry said.

She noticed that there was not a local advisory board in her community. When she contacted First Book's national office, she discovered that Greta Harrison and Stan Winarski were already in the process of building First Book -- Hampton Roads. Lineberry seized the opportunity and jumped on board.

"Donating proceeds to First Book was a great feeling, but becoming involved in First Book -- Hampton Roads was even more rewarding because I was helping the community where my grandparents, parents, myself and, now, my children were living," Lineberry said. "Donating money is always helpful, but donating time and effort is priceless."

She has written press releases and letters for First Book -- Hampton Roads and uses her editorial background to edit other materials. She also created the Web site for the organization -- www.firstbook-hamptonroads.com -- and seeks out other ways to promote them through the Web using photos and videos from events.

"I love helping in any way that I can, but my favorite experiences with First Book -- Hampton Roads are when I see the children's eyes light up as they receive new books from the organization," Lineberry said.

"It's a team effort that involves many board members and liaisons. I am just a small part of an organization that makes big things happen in Hampton Roads," Lineberry said. "The co-chairs, Harrison and Winarski, are the backbone of the organization and work hard year-round to make First Book -- Hampton Roads' mission possible."

Lineberry took some time off from work and volunteering after having her daughter, Claire, on July 4. "Now I am back to work at NASA Langley and excited to get back to work for First Book -- Hampton Roads also," she said. "I find comfort in knowing that I am, in a small way, making a positive impact in the community that has given so much to me and also that I can serve as an example for my children to do the same."