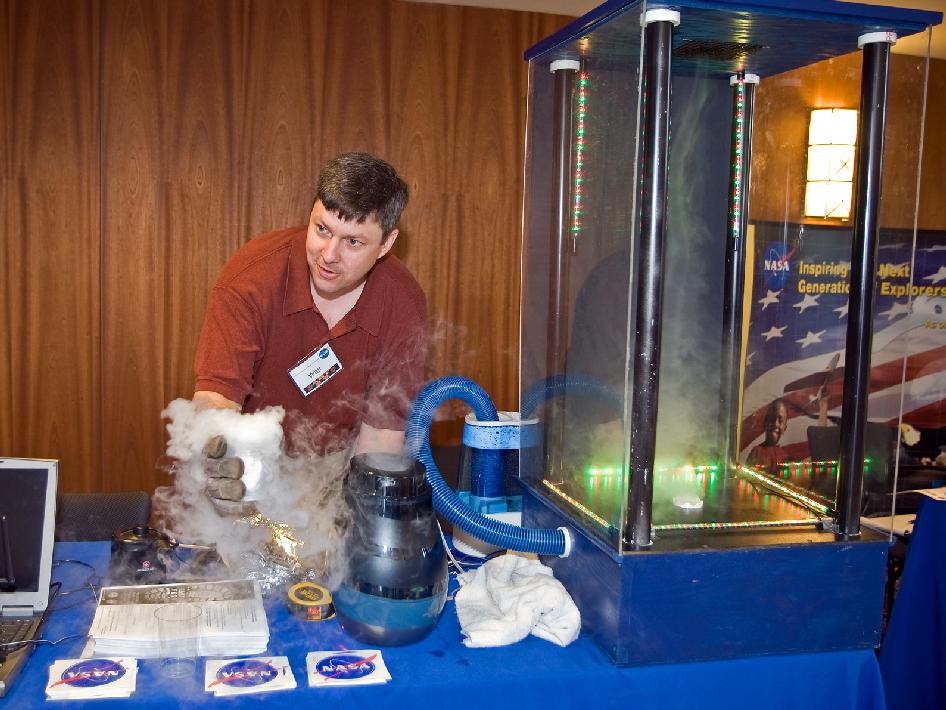 The spirit of volunteerism is a marriage of two periods in Walt Baskin's life. One provided material for the show, the other showed a sense of reward that comes from helping the children that see it.

From that, Baskin, who works in the Atmospheric Science Data Center, has spun a life away from Langley that includes time in classrooms spent teaching aeronautics and physics by combining instruction with entertainment.

The Cub Scouts and, now, Boy Scouts, appreciate it, too.

The first period of inspiration came when Baskin was a cadet at Virginia Military Institute.

"Two professors went on the road with all of these fantastic demonstrations," he said. "I was fascinated by it. Col. (Richard Bryant) Minnix, who was in his 60s, would get on a skateboard, put on a helmet and get a fire extinguisher and blast himself across the stage."

"I thought it was great and the kids loved it," Baskin said.

The second period came when he was in the Air Force.

"I got involved with the civil air patrol as a mission pilot," he said.

Among other things, the CAP flies search and rescue operations.

"They also had this cadet program," Baskin said. "It was a dual thing. They had a military side and also aerospace education: the history of flight, how rockets fly, how jets fly and navigate."

He was in his mid-20s, and a spark was lit that has yet to be extinguished.

When son Andrew, now 12, was younger, Baskin hit upon an idea to bring physics to an elementary school classroom. He called Langley's Outreach office to see if a space suit was available. Told it was, he donned it and went into the classroom, immediately piquing enthusiasm among the tots.

With their attention, he used simple demonstrations of physics and meteorology to get his point across.

Same with the Cub Scouts.

"They were looking for a new leader for the pack," Baskin said. "I had showed up in a spacesuit as a parent to a pack meeting and ended up serving as Packmaster for two years."

This was no ordinary Pinewood Derby packmaster.

"I did not always use the standard Cub Scout things," Baskin said. "I would bring props and equipment to talk about tornados, about how planes fly, how steam engines work. They loved that."

There were experiments, some good, others, well . . .

"One was terrible," he said, laughing. "I tried to use Cub Scouts to simulate a cold front. Some scouts were cold air, some were warm air, and it turned into this huge pile of wrestling kids. I said, 'Well, we're not going to do that again.' "

Andrew is in Boy Scout Troop 94 now, and dad has drawn back slightly, but certainly not permanently. He's a merit badge counselor in meteorology, aeronautics and other courses for Troop 94.

"Pioneering is one of my favorites," Baskin said. "It's engineering in the woods."

And he knows the next step is coming. "I suspect within the next few weeks, I'll be an assistant scoutmaster," he said. "I mean, I know the call is coming."

And the answer will be yes. It always has, when it comes to science and the world around them.

Daughter Madison, 9, has just moved up from Brownies and Girl Scouts, and it's likely that a phone call will come from them, too. Baskin will answer it. It's what he does.