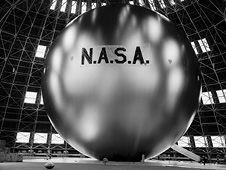 The 'Satelloon' Takes to the Sky
ASK the Academy
July 30, 2010 -- Vol. 3, Issue 7
Academy of Program/Project and Engineering Leadership (APPEL)

NASA launched the Echo I communications balloon satellite on Aug. 12, 1960.

The 100-foot-diameter (30.5 meter) satellite, designed by the Space Vehicle Group of the NASA Langley Research Center and constructed by General Mills of Minneapolis, Minnesota, was shown during ground inflation tests in 1959.

Suspended from the ceiling of a hangar the sphere, named "Echo," was inflated by use of a blower connected to the satellite by a hose. Forty thousand pounds (18,144 kg) of air was required to inflate the sphere on the ground, while in orbit it only required several pounds of gas to keep it inflated.

Echo was a passive communications satellite which reflected radio and radar signals as a limited communications relay. It was also used, over a period of time and with accurate tracking, to plot the variations in air density at the top of the atmosphere by following the vagaries of its orbit.

Weighing 150 pounds (68 kg), the satellite was inflated in space. It did not have a rigid skin and accordingly was used at high altitudes where it would be subjected to negligible aerodynamic drag force.

To keep the sphere inflated in spite of meteorite punctures and skin permeability, a make-up gas system using evaporating liquid or crystals of a subliming solid were incorporated inside the satellite.