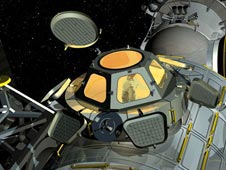 Cupola might be considered the ultimate observation deck, and it's bound for the International Space Station. The module was built for the European Space Agency by Alenia Spazio in Turin, Italy, and then shipped to NASA's Kennedy Space Center in Florida in October 2004.

The small, dome-shaped module has seven windows -- six around the sides and one on top -- that can be shuttered when not in use to protect them from micrometeoroids and the harsh space environment. The windows are made of fused silica and borosilicate glass panes, with temperature-sensing elements and window heaters.

When attached to the Tranquility Node 3 module, Cupola will resemble a circular bay window that will provide a vastly improved view of the station's exterior. Just under ten feet in diameter, the module will accommodate two crew members and portable workstations that can control station and robotic activities. The multi-directional view will allow the crew to monitor spacewalks and docking operations, as well as provide a spectacular view of Earth and other celestial objects.

Astronauts are set to deliver both Cupola and Tranquility to the space station during mission STS-130, as construction of the International Space Station draws to a close.