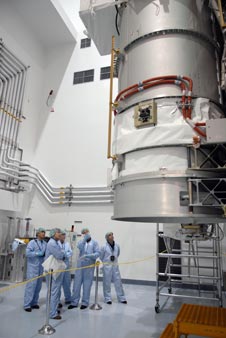 Image above: From the floor of Kennedy’s Space Station Processing Facility in Florida, astronauts and technicians look at the mast canister for one of the S6 integrated truss structure’s solar arrays. Image credit: NASA/Kim Shiflett
› View larger image

The International Space Station’s power generating capacity is set to get a boost early next year with the installation of the starboard 6, or S6, truss segment and solar arrays. The S6 is the final piece of the station's football-field-long backbone.

One of only a few station components fabricated in Houston, the pieces that make up the S6 arrived at Kennedy Space Center in Florida aboard NASA's "Super Guppy" cargo aircraft in 2002. They were integrated inside the Space Station Processing Facility, and will be delivered to the station as one segment aboard space shuttle Discovery during mission STS-119.

Discovery’s crew will attach the segment to the end of the S5 truss, completing the starboard side of the station's structure. The segment includes the fourth and final set of solar arrays and batteries for generation, storage, regulation and distribution of electrical power for the station.

Each set of solar arrays has a wingspan of 240 feet. Like the other three already installed on the station, the S6 solar array wing has two arrays with 32,800 solar cells. The solar panels convert sunlight to DC power, which is routed to the batteries and either sent on to power the station’s equipment or stored for use when the panels have no sunlight to generate power. Rotation joints steer the solar panels so that they can track the sun as the station moves in its orbit around Earth.

Photovoltaic radiator panels are attached at a right angle to the arrays to permit circulation of cooling fluid that reduces battery and electrical system temperatures.

Technicians at Kennedy’s processing facility will continue conducting inspections and verification tests on the segment as they ready the S6 for flight.