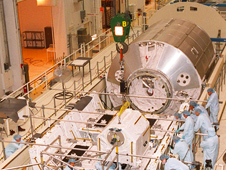 Image above: Workers check out the placement of one of four gas tanks on the Spacelab Logistics Double Pallet in the Operations and Checkout Building on May 7, 2001. Part of the STS-104 payload, the two gaseous oxygen and two gaseous nitrogen storage tanks comprised the high pressure gas assembly that was attached to the International Space Station's Joint Airlock Module. Image credit: NASA
› Larger image 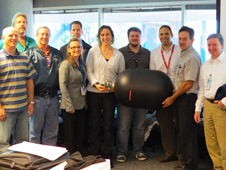 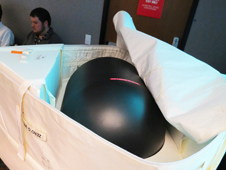 Image above: The Recharge Tank Assembly, or RTA, is a major component of the Nitrogen Oxygen Recharge System. Image credit: NASA
› Larger image

Humans are by nature consumers, regardless of where they might live and work. Supply runs to the International Space Station began as soon as assembly got under way.

The first supplies were delivered in May 1999 aboard space shuttle Discovery during the STS-96 mission, the first shuttle docking to the fledgling station.

The station, or ISS, was merely the Russian Zarya control module mated to the U.S. Unity Node 1 connecting module, a far cry from the orbiting laboratory now the size of a five-bedroom house. Node 1 was delivered by the STS-88 crew, which included Kennedy Space Center Director Bob Cabana.

The STS-96 crew dropped off the Orbital Transfer Device, a U.S.-built crane, and parts of the Russian crane Strela, as well as 3,567 pounds of "material," which included clothing, sleeping bags, spare parts, medical equipment, supplies, hardware and about 85 gallons of water in anticipation of the needs of the station's future "consumers," soon to be arriving in the form of international Expedition crews.

With the end of the Space Shuttle Program in sight, NASA's partners renewed their commitment to space-based research by providing other resupply methods.

The Progress, launched from the Baikonur Cosmodrome in Kazakhstan on a Soyuz rocket, is an automated, unpiloted version of the Soyuz spacecraft capable of delivering supplies and fuel tanks. The Progress also has the ability to raise the station's altitude and control the orientation of the station using the vehicle's thrusters.

The HTV, launched from the Tanegashima Space Center in Japan on an H-IIB rocket, is the only resupply vehicle also capable of delivering external unpressurized cargo to the station since the shuttle's retirement. The cargo is mounted to an exposed pallet that sits within the HTV's unpressurized section.

The ATV, about the size of a traditional London double-decker bus, became the largest and heaviest vehicle supplying the station after the shuttle's retirement in 2011. Launched from the Guiana Space Centre in Kourou, French Guiana, on Ariane 5 rockets, the ATV can carry almost three times the amount of fuel as a Progress.

However, NASA soon will become the primary provider of oxygen and nitrogen to the station with the development of the Nitrogen Oxygen Recharge System (NORS), a component of NASA's Orbital Replacement Unit (ORU) Project. Primary responsibility for launch preparations of this ORU Project is assigned to Kennedy's ISS Ground Processing and Research Project Office and Ground Processing Directorate.

ORUs are modular units with quick disconnects that make them easy to replace in their entirety.

Oxygen and nitrogen is needed for replenishment of the station's cabin breathing air, as well as for operation of the airlock and the pressurized ammonia cooling systems.

"We have responsibility here at Kennedy for processing of many ISS ORUs," said Steve Bigos, the project manager for ORU and NORS at Kennedy, "and the most common ORU will be the NORS Recharge Tank Assembly (RTA)."

Kennedy will fill the RTAs with oxygen or nitrogen at about 6,000 PSI and then prepare the RTA for transfer to the launch providers.

"We are currently building the support equipment required for our processing operations," Bigos said.

Although the ATV and Progress spacecraft usually transport some amount of nitrogen and oxygen on each visit to the station, most of the orbital lab's future needs will be provided by NORS RTAs.

"The NORS pressure vessels are in the manufacturing phase now," Bigos said. "The first should be delivered in October 2013."

Plans are to launch the canisters on HTVs from Tanegashima in Japan or on U.S. spacecraft under development by commercial companies through NASA Commercial Orbital Transportation Services (COTS) agreements.

One of those is SpaceX's Dragon capsule, scheduled for its first demonstration test flight May 19 from Cape Canaveral Air Force Station.

The other is Orbital Sciences' Cygnus spacecraft, which will launch from NASA's Wallops Flight Facility in Virginia. The test flight of Orbital's Antares rocket tentatively is set for this fall, with the Cygnus demonstration flight following in the winter.

"Typically, there will be one NORS vessel on every COTS flight," Bigos said, "but there could be two or three on some flights. At this time, 55 are on the NORS flight manifest, but anywhere from 100 to 200 may fly in the future."

The NORS slated on HTV missions will be prepared in Kennedy's Space Station Processing Facility and shipped to Japan for launch, accompanied by a small team from Kennedy.

Before the first NORS is ready to fly, though, Bigos and his team will be busy preparing other ORUs for flight, such as a Main Bus Switching Unit and a Utility Transfer Assembly for HTV-4.

As long as a steady flow of international researchers continues to make their way to and from the orbiting laboratory, Kennedy will be at the forefront helping to provide their basic needs. Kay Grinter
NASA's John F. Kennedy Space Center
› Back To Top