Explosives are His Specialty
Larry Taylor has a blast at his job at NASA's Kennedy Space Center in Florida -- quite literally. 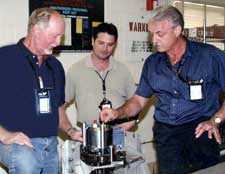 As the manager of Ordnance, Optics and Labs with United Space Alliance, he oversees a team that is responsible for testing and ensuring the safety of more than 250 strategically placed and preciously timed explosive devices that detonate on the space shuttle each time the vehicle flies.

In the late '60s, Taylor became interested in the space program as a young man living in Brevard County, Fla., where each Apollo launch filled him with enthusiasm.

Upon joining the U.S. Air Force after high school, Taylor served as a munitions specialist. "That was an accident,'' he said, "That was meant to be a volunteer career field. But during the Vietnam War, they needed people to work in that particular area. I was kind of annoyed at being chosen, but I stuck with it and now I've been in it for many years." 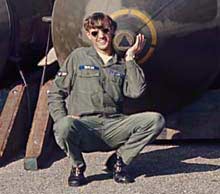 Taylor was hired at Kennedy in 1982, awarded the coveted Silver Snoopy in June of 1990 and became manager of the ordnance facility in 1991. This year, he's celebrating his 24th anniversary at the space center.

Part of Taylor's team of technicians handles all of the ordnance for the shuttle orbiter, external tank and solid rocket boosters. They assemble and test each electrical device with a variety of tests, once upon receiving them and again at the Ordnance Storage Facility before flight.

Taylor is also responsible for the Ordnance Test Lab. The lab has two testing cells and each is equipped with a blasting chamber, which is a 1/4-inch-thick steel box slightly larger than a microwave oven. The chambers are housed in rooms with one-foot-thick walls of reinforced concrete.

The group processes "NASA standard initiators," devices that operate like blasting caps, detonating the explosive devices on the shuttle. NASA also uses these devices on satellites for various purposes. 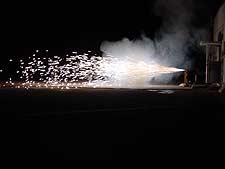 Image right: Hydrogen burn igniter testing in progress. Six igniters are fired at every launch and they produce the sparks everyone sees just before liftoff. Their purpose is to burn off excess hydrogen just prior to main engine ignition. Image credit: NASA/KSC + View High Resolution Image

The two boosters then gently glide back down to Earth by way of the parachutes tucked into the frustum (dome segment) on top of the boosters. These chutes deploy upon detonation of a flexible charge along the inner circumference of the frustum.

After splashing into the ocean, specially designed explosive devices use the salt water as a trigger to complete the circuit, blasting open a hinge to release the parachutes from the boosters. The boosters then are retrieved by NASA's two retrieval ships to be refurbished and used for another launch.

During shuttle landing, few people realize that an explosive thruster pushes the nose landing gear downward. The drag chute is also deployed and released by explosives charges that are manually activated by the crew.

Taylor's team also handles many aspects of shuttle optics, entailing fine measurements and alignments with a variety of different tools.

Before the space shuttle launches, for example, the Optics group is the first crew on the mobile launch platform to perform the alignment of the "hold-down" posts for the booster aft skirt that connects the entire space shuttle to the platform.

The team takes measurements on many other vital launch components: the stacked solid rocket boosters, to make sure they're aligned with the external tank; the crawler, to test for wear and tear; the interior of the shuttle cargo bay; and most recently, the new camera boom and mounts.

On occasion, Taylor's Optics group has had to measure the inside of the orbiter cargo bay because of a concern about a particular payload fitting. A computer using those coordinates is able to draw the cargo bay to exact measurements within 10,000th of an inch.

The team prepares flight batteries for payloads, including those used for the Hubble Telescope. "I even have responsibilities for the power supplies and batteries all over the Cape and at Dryden (Flight Research Center). I have to send a crew there once a year for test purposes, so we do quite a bit with the program." 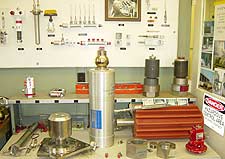 Image left: Taylor gives "show and tell" performances for groups and students using samples like these to explain how certain devices work and what they do on the space shuttle. Image credit: NASA/KSC
+ View High Resolution Image

In addition, Taylor's team is in charge of configuring the Launch Control Center's firing rooms to communicate with the shuttle at the launch pad, the orbiter processing facility and the mobile launch platform.

In February 2003, Taylor took time out of his busy work schedule to volunteer his help in the recovery efforts of Space Shuttle Columbia in Texas.

He's often asked how he got a job that includes "blowing things up." Taylor modestly replies: "I never thought I'd use the explosive training after the Air Force, and then I ended up here at Kennedy and was lucky enough to work with explosives for the space shuttle. It's really interesting work; I wish I had done it sooner."