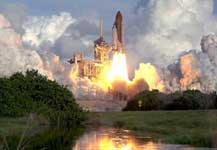 Whether awaiting liftoff from Kennedy Space Center's launch pads or undergoing space-age upgrades, NASA's space shuttle orbiters were majestic in appearance, intricate in design, and advanced in the possibilities they offered mankind in the exploration of our universe.

Image at left: Billowing clouds of smoke and steam roll away from the launch pad while the water below captures the brilliance of the flames as the space shuttle soars above the lightning mast. Credit: NASA/KSC