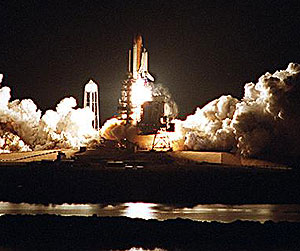 For the first time, an orbiter was named through a national competition involving students in elementary and secondary schools. They were asked to select a name based upon an exploratory or research sea vessel. In May 1989, President George Bush announced the winning name.

Image left: Space Shuttle Endeavour blazes into the night sky on mission STS-113, the 19th for Endeavour, and the 112th flight in the Shuttle program. Image credit: NASA

Endeavour was named after a ship chartered to traverse the South Pacific in 1768 and captained by 18th century British explorer James Cook, an experienced seaman, navigator and amateur astronomer. He commanded a crew of 93 men, including 11 scientists and artists.

Cook's main objective, tasked by the British Admiralty and the Royal Society, was to observe the Transit of Venus at Tahiti. This reading enabled astronomers to find the distance of the Sun from the Earth, which then could be used as a unit of measurement in calculating the parameters of the universe.

Cook's achievements on Endeavour were numerous, including the accurate charting of New Zealand and Australia and successfully navigating the Great Barrier Reef. Thousands of new plant specimens and animal species were observed and illustrated on this maiden voyage. Cook also established the usefulness of including scientists on voyages of exploration.

Space Shuttle Endeavour embodies similar experiences. Its first launch, the STS-49 mission, began with a flawless liftoff on May 7, 1992, beginning a journey filled with excitement, anticipation and many firsts.

One of Endeavour's primary assignments was to capture INTELSAT VI, an orbiting, but not functioning, communications satellite, and replace its rocket motor. Unfortunately, the Space Shuttle wasn't designed to retrieve the satellite, which created many repair challenges.

The project sparked public interest in the mission and NASA received a deluge of suggestions on possible ways for the crew to grab onto the satellite. It took three attempts to capture the satellite for repairs to be made. An unprecedented three-person spacewalk took place after the procedure was evaluated by the astronauts and ground team.

Between rescue attempts, the STS-49 crew was busy with a variety of activities. They conducted medical tests assessing the human body's performance in microgravity, and recorded footage for an educational video comparing Cook's first voyage on Endeavour with the Space Shuttle orbiter's maiden voyage.

Once the new motor was attached, it propelled the satellite into the correct orbit, providing a relay link for the equivalent of 120,000 two-way simultaneous telephone calls and three television channels.

This was the first time four spacewalks were conducted on a Space Shuttle mission and one of them was the longest in space history, lasting more than eight hours.

The crew also took part in the Commercial Protein Crystal Growth experiment. The research tested the production of protein crystals grown in microgravity. 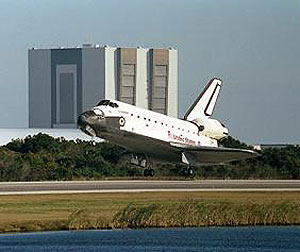 Because of Endeavour's excellent performance, NASA decided to extend the flight two days to complete more mission objectives and allow the crew enough time to prepare for landing.

Image right: Space Shuttle Endeavour is moments away from touchdown at the Kennedy Space Center's Shuttle Landing Facility, bringing to a close the STS-113 mission to the International Space Station. Image credit: NASA

OV-105 became the first Space Shuttle orbiter to use a drag chute during a landing -- only one of many technical improvements made to Endeavour.

Just as James Cook set the standard with his seafaring Endeavour voyage, the Space Shuttle Endeavour missions have continued to uphold and surpass the standards set by its namesake, more than 200 years later.

Spare parts from the construction of Discovery (OV-103) and Atlantis (OV-104), manufactured to facilitate the repair of an orbiter if needed, were eventually used to build OV-105.

Endeavour also featured new hardware, designed to improve and expand orbiter capabilities. Most of this equipment was later incorporated into the other three orbiters during out-of-service major inspection and modification programs.

Endeavour's upgrades include:
Space Shuttle Endeavour's OMDP began in December 2003. Engineers and technicians spent 900,000 hours performing 124 modifications to the vehicle. These included recommended return to flight safety modifications, bonding more than 1,000 thermal protection system tiles and inspecting more than 150 miles of wiring. Eighty five of the modifications are complete and 39 are still underway.

Two of the more extensive modifications included the addition of the multi-functional electronic display system (glass cockpit), and the three-string global positioning system.

The glass cockpit is a new, full-color, flat-panel display system that improves interaction between the crew and orbiter. It provides easy-to-read graphics portraying key flight indicators like attitude display and mach speed. Endeavour was the last vehicle in the fleet to receive this system.

The three-string global positioning system will improve the shuttle's landing capability. It will allow Endeavour to make a landing at any runway long enough to handle the shuttle. The previous system only allowed for landings at military bases. Shuttle major modification periods are scheduled at regular intervals to enhance safety and performance, infuse new technology and allow thorough inspections of the airframe and wiring. This was the second of modification period performed entirely at Kennedy. Endeavour's previous modification was completed in March 1997.

Endeavour has undergone extensive modifications, including the addition of all of the return-to-flight safety upgrades added to both Discovery and Atlantis.

Endeavour's flight on mission STS-118 was the first launch for the orbiter in more than four years.