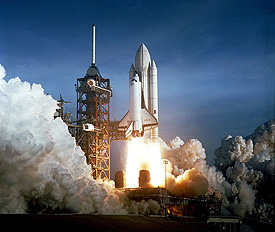 On April 12, 1981, a bright white Columbia roared into a deep blue sky as the nation's first reusable Space Shuttle. Named after the first American ocean vessel to circle the globe and the command module for the Apollo 11 Moon landing, Columbia continued this heritage of intrepid exploration. The heaviest of NASA's orbiters, Columbia weighed too much and lacked the necessary equipment to assist with assembly of the International Space Station. Despite its limitations, the orbiter's legacy is one of groundbreaking scientific research and notable "firsts" in space flight.

Space Shuttle mission STS-9, launched in late November 1983, was the maiden flight for Spacelab. Designed to be a space-based science lab, Spacelab was installed inside the orbiter's cargo bay. Spacelab featured an enclosed crew work module connected to an outside payload pallet, which could be mounted with various instruments and experiments. From inside the lab, astronauts worked with the experiments on the pallet and within the crew module itself. The lab would go on to fly aboard the rest of the fleet, playing host throughout its accomplished lifetime to unprecedented research in astronomy, biology and other sciences. Spacelab ultimately finished where its career began; its 16th and final mission was hoisted into space aboard Columbia in 1998.

In addition to Columbia's STS-1 flight and Spacelab, the orbiter was also the stage for many other remarkable firsts. Germany's Dr. Ulf Merbold became the first European Space Agency astronaut when he flew aboard 1983's STS-9. The Japanese Space Agency and STS-65's Chiaki Mukai entered history as the first Japanese woman to fly in space in 1994. In a display of national pride, the crew of STS-73 even "threw" the ceremonial first pitch for game five of the 1995 baseball World Series, marking the first time the pitcher was not only outside of the stadium, but out of this world. 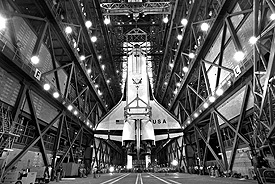 Perhaps Columbia's crowning achievement was the deployment of the gleaming Chandra X-ray Observatory in July 1999. Carried into space inside the orbiter's payload bay, the slender and elegant Chandra telescope was released on July 23. Still in flight today, the X-ray telescope specializes in viewing deep space objects and finding the answers to astronomy's most fundamental questions.

Columbia and its crew were tragically lost during STS-107 in 2003. As the Space Shuttle lifted off from Kennedy Space Center in Florida on January 16, a small portion of foam broke away from the orange external fuel tank and struck the orbiter's left wing. The resulting damage created a hole in the wing's leading edge, which caused the vehicle to break apart during reentry to Earth's atmosphere on February 1.

Columbia is commonly referred to as OV-102, for Orbiter Vehicle-102. The orbiter weighed 178,000 pounds with its main engines installed.

Columbia was the first orbiter to undergo the scheduled inspection and retrofit program. In 1991, Columbia returned to its birthplace at Rockwell International's Palmdale, Calif., assembly plant. The spacecraft underwent approximately 50 upgrades there, including the addition of carbon brakes and a drag chute, improved nose wheel steering, removal of instrumentation used during the test phase of the orbiter, and an enhancement of its Thermal Protection System. The orbiter returned to Florida in February 1992 to begin processing for mission STS-50, launching in June of that year.

In 1994, Columbia was transported back to Palmdale for its first major tear-down and overhaul, known as the Orbiter Maintenance Down Period (OMDP). This overhaul typically lasts one year or longer and leaves the vehicle in "like-new" condition.

Its second OMDP came in 1999, when workers performed more than 100 modifications on the vehicle. The orbiter's most impressive upgrade likely was the installation of a state-of-the-art, Multi-functional Electronic Display System (MEDS), or "glass cockpit." The MEDS replaced traditional instrument dials and gauges with small, computerized video screens. The new system improved crew interaction with the orbiter during flight and reduced maintenance costs by eliminating the outdated and tricky electromechanical displays.