Grow Text SizeShrink Text Size
Space Shuttle Overview: Atlantis (OV-104)
NASA's fourth space-rated space shuttle, OV-104 "Atlantis," was named after the two-masted boat that served as the primary research vessel for the Woods Hole Oceanographic Institute in Massachusetts from 1930 to 1966. The boat had a 17-member crew and accommodated up to five scientists who worked in two onboard laboratories, examining water samples and marine life. The crew also used the first electronic sounding devices to map the ocean floor. 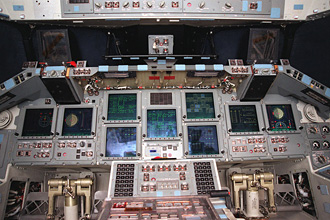 Construction of the orbiter Atlantis began on March 3, 1980. Thanks to lessons learned in the construction and testing of orbiters Enterprise, Columbia and Challenger, Atlantis was completed in about half the time in man-hours spent on Columbia. This is largely attributed to the use of large thermal protection blankets on the orbiter's upper body, rather than individual tiles requiring more attention.

Weighing in at 151,315 pounds when it rolled out of the assembly plant in Palmdale, Calif., Atlantis was nearly 3.5 tons lighter than Columbia. The new orbiter arrived at NASA's Kennedy Space Center in Florida on April 9, 1985, and over the next seven months was prepared for her maiden voyage.

Like her seafaring predecessor, orbiter Atlantis \carried on the spirit of exploration with several important missions of her own. On Oct. 3, 1985, Atlantis launched on her first space flight, STS 51-J, with a classified payload for the U.S. Department of Defense. The vehicle went on to carry four more DOD payloads on later missions. 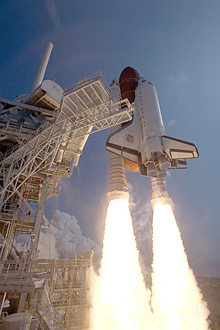 Atlantis also served as the on-orbit launch site for many noteworthy spacecraft, including planetary probes Magellan and Galileo, as well as the Compton Gamma Ray Observatory. An impressive array of onboard science experiments took place during most missions to further enhance space research in low Earth orbit.

Starting with STS-71, Atlantis pioneered the Shuttle-Mir missions, flying the first seven missions to dock with the Russian space station. When linked, Atlantis and Mir together formed the largest spacecraft in orbit at the time. The missions to Mir included the first on-orbit U.S. crew exchanges, now a common occurrence on the International Space Station. On STS-79, the fourth docking mission, Atlantis ferried astronaut Shannon Lucid back to Earth after her record-setting 188 days in orbit aboard Mir.

In recent years, Atlantis has delivered several vital components to the International Space Station, including the U.S. laboratory module, Destiny, as well as the Joint Airlock Quest and multiple sections of the Integrated Truss structure that makes up the station's backbone.

By early 2005, Atlantis had undergone two overhauls known as Orbiter Maintenance Down Periods. Some of the most significant upgrades and new features included: For additional information, visit:
› Shuttle Facts and Statistics