Grow Text SizeShrink Text Size
Acaba Has Close Ties to Space Coast
A group of local teachers will be cheering from a viewing area at Kennedy Space Center as science teacher turned NASA astronaut Joseph Acaba boards space shuttle Discovery for launch on the STS-119 mission to the International Space Station. Acaba will carry their good wishes and a special memento as the shuttle lifts off from Launch Pad 39A. 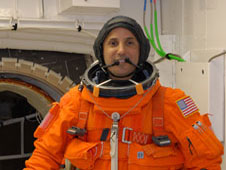 Though Acaba was born in Inglewood, Calif., and raised in Anaheim, Calif., he has ties to central Florida. From 1999 to 2000, the bilingual teacher taught integrated science at Melbourne High School. He also taught math and science at Dunnellon Middle School in Marion County for four years.

The memento he will carry is a Melbourne High School bulldog mascot flag containing a very special coin that says “You Make the Difference.” Vicki Detwiler, a biology teacher at Melbourne High, was instrumental in acquiring the flag for Acaba to carry.

“He made a great impression on the students and teachers,” Detwiler said. “He was very creative and helped the students appreciate their diversity and potential. He was a natural in the classroom.”

Detwiler hopes the flag will be returned to Melbourne High so a special tribute to Acaba can be held in the school’s new science building.

She and a group of teachers heard Acaba speak at a Florida Association of Science Teachers, or FAST, conference in Orlando in 2007. Detwiler said it was great to see him and do some catching up.

“He was an outstanding role model for the students,” said Melbourne High School Principal James Willcoxon. “We really enjoyed having Joe at our school.”

During STS-119, Acaba will be on the flight deck as mission specialist 1 during ascent and entry. He will operate the shuttle’s robotic arm and perform two spacewalks to help attach the S6 truss and final set of large solar arrays to the station.

He worked as a hydrogeologist in Los Angeles and spent two years in the U.S. Peace Corps where he taught modern teaching methods to more than 300 teachers in the Dominican Republic. Acaba also served as the island manager of the Caribbean Marine Research Center at Lee Stocking Island in the Bahamas, and the shoreline revegetation coordinator in Vero Beach, Fla., where he planned, designed and implemented a mangrove revegetation project.

He was then assigned to the Hardware Integration Team in the Space Station Branch working technical issues with European Space Agency hardware before his assignment to the STS-119 mission.

"If you look at all the jobs that I’ve had up to becoming an astronaut, I’ve really enjoyed all of them and so my biggest advice, or if you look at my example, is really do what you like to do and have a good time doing it," Acaba said. "If you do that, and you work hard, you’re going to be successful."