Vehicle Assembly Building Getting a Face-lift 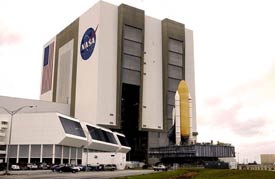 At Kennedy Space Center in Florida, the Vehicle Assembly Building's massive steel doors tower over the Launch Complex 39 area, serving as beacons that remind us of NASA's past and beckon toward its future.

After 40 years of wear and tear, the facility's vertical lift doors are undergoing restoration to support the remaining space shuttle launches and the next generation of launch vehicles.

Image to right: The Vehicle Assembly Building is where space shuttle components are assembled for launch. Credit: NASA

"This project… will help preserve the functionality of the building and ensure the Vehicle Assembly Building is available to serve NASA and the space program for decades," said Mark Sortman, an infrastructure manager with the space shuttle's primary contractor, United Space Alliance.

Originally constructed to assemble the Saturn V moon rockets, today the Vehicle Assembly Building is where space shuttle components are inspected and put together. The 52-story structure is sectioned into four "high bays" and split by an open area called the "transfer aisle." In high bays 1 or 3, technicians connect solid rocket boosters, external fuel tanks and orbiters for launch. In the remaining high bays 2 and 4, external tanks are inspected after arriving at Kennedy. Doors are located on each of the high bays and at both ends of the transfer aisle. 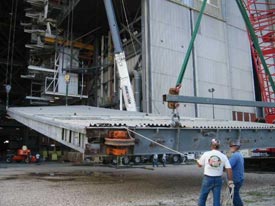 The facility's restoration kicked off in 2003 with a thorough inspection of the vertical lift doors and openings.

Since then, workers have been repairing, sandblasting and painting the vertical lift doors in each of high bays 1 and 3, as well as replacing siding, buffers and limit switches.

Siding is being replaced in high bays 1 and 2, including some with a Kynar-coated aluminum material. Kynar is a superior coating that helps protect paint from the harsh rays of the sun and Kennedy's saltwater environment. Technicians are also restoring the doorway's supporting steel structures.

The overall work is not without its challenges. Sortman noted it has to be completed without interrupting shuttle launches. When high bay 3 was needed for shuttle stacking in August 2005, the workers transferred to high bay 1 and continued working.

"The doors are a major part of the building's functionality. It's very important that they work properly," said Lauren Price, a NASA system engineer for cranes, doors, platforms and heavy equipment in NASA's Engineering Directorate.

Price added the project is expected to be completed in mid-2009.

"The refurbishment is essential to the current and future space programs," Sortman said. "The building is not only historically valuable, but it is a true monument to American ingenuity and an inspiration to millions of visitors."