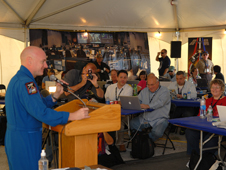 Watching a space shuttle lift off from Florida's space coast is a remarkable and memorable experience. The ground rumbles, car alarms screech, and for a few moments everyone is silent until clapping and whistling erupts in unison.

The "Tweet up" event allowed NASA to share the excitement of a shuttle launch with a whole new audience -- Tweeters came from 21 states and four countries -- with an estimated 150,000 followers.

Catherine Qualtrough from North Carolina, who goes by @CatherineQ on Twitter, typed, "FEELING the launch was amazing. Sound wave strong and you feel it in your chest."

Louis Suarato from New York, also known as @LouisS, typed, "The most amazing experience of my life! The vibration goes through your body, engulfs you & you feel like part of the shuttle."

After the adrenaline of launch slowed down, some Tweeters took the time to respond to questions from their loyal followers.

Others even described the emotional aspect of the event.

"Saw more than a few teary eyes after the launch before it got too blurry to see," typed Chris Bridges, @cabridges, from Orange City, Fla.

NASA opened registration for the event Oct. 16 on the Web and had an overwhelming response. The 100 slots available, plus an additional 50 backup slots, were scooped up in less than 20 minutes. From there, a team of about 30 people from Kennedy and NASA Headquarters began planning for the Tweeps' arrival.

"I'm really proud of the team who has been working on the Tweet up," said NASA Headquarters Public Affairs Officer John Yembrick, who moderated the event. "We didn't hire anyone new for this; everyone who has contributed has done so in addition to their already busy schedules. We've had support from IT, NASA TV, NASA photo, security and more."

The dedicated team provided the launch enthusi¬asts with wireless Internet, a cozy tent outside the NASA News Center, a tour of Kennedy facilities, and a chance to talk with shuttle technicians, engineers, astronauts and managers, as well as plenty of goodies to take home.