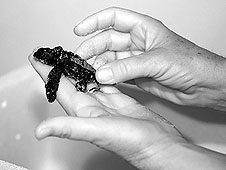 Image above: A newly-hatched turtle emerges from endangered sea turtle eggs brought from beaches along the northern U.S. Gulf Coast. The hatchlings are ready to be released into the Atlantic Ocean off NASA's Kennedy Space Center in Florida. Photo credit: NASA/Kim Shiflett
› View Hi-res Image 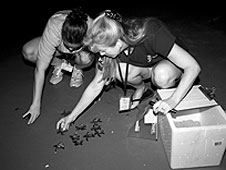 Image above: The first group of hatchlings from endangered sea turtle eggs brought from beaches along the northern U.S. Gulf Coast are being released into the Atlantic Ocean off NASA's Kennedy Space Center in Florida. Jane Provancha, Kennedy's lead biologist at the hatchery, is heading-up the project. Photo credit: NASA/Kim Shiflett
› View Hi-res Image 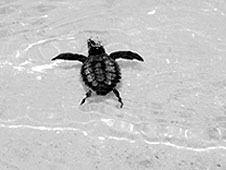 Image above: One of hundreds of hatchlings from endangered sea turtle eggs brought from beaches along the northern U.S. Gulf Coast is being released into the Atlantic Ocean off NASA's Kennedy Space Center in Florida. Photo credit: NASA/Kim Shiflett
› View Hi-res Image

Dozens of endangered baby sea turtles are having an unusual birthday at NASA's Kennedy Space Center in Florida with the help of dozens of officials and volunteers who rescued them from the oil spill-threatened northeastern shores of the Gulf of Mexico.

Two groups of Kemp's ridley sea turtle hatchlings have been released onto Atlantic Ocean beaches so far as the unprecedented operation to save sea turtle nests ramps up.

The release and relocation work is part of the environmental endeavor by the U.S. Fish and Wildlife Service, the Florida Fish and Wildlife Conservation Commission, the National Park Service, NOAA, FedEx and conservationists to help minimize the risk to this year's sea turtle hatchlings from impacts of the oil spill. During the next several months, this plan involves carefully moving an anticipated 700 nests to Kennedy that have been laid on Florida Panhandle and Alabama beaches.

The hatchlings are part of the same populations of species that lay their eggs on Atlantic and Gulf coast. The endangered species include loggerhead turtles, but nests from leatherback and green turtles, in addition to Kemp's ridley, may be brought to the Kennedy hatchery. In all, about 50,000 hatchlings normally start their lives on Gulf coast beaches during hatching season.

FedEx is providing a specialized truck to ferry the sensitive eggs to Kennedy.

The Merritt Island National Wildlife Refuge was established in 1963 as an overlay of Kennedy Space Center, where it shares the land with space shuttle launch pads, rockets and research and development facilities. In addition, Canaveral National Seashore is partially in Kennedy also, and together these agencies provide more 24 miles of sea turtle nesting beach habitat.

"We are home to many species of protected wildlife and we hope to provide these sea turtles with a better chance of survival," said Kennedy Center Director Bob Cabana.

From hand-picking each egg from beaches on the northern Gulf of Mexico, to trucking them in custom vehicles from FedEx to incubating them at Kennedy and finally releasing them to crawl into the surf, the work is as about as delicate as it gets.

Left on their own, the turtles likely would have been helpless against the effects of the BP Deepwater Horizon oil spill, wildlife officials said.

"We understand that significant risks remain, but the option of allowing tens of thousands of turtle hatchlings to crawl into oiled waters of the northern Gulf of Mexico is not acceptable," said Rodney Barreto, chairman of the Florida Fish and Wildlife Conservation Commission.

Jane Provancha, the lead biologist and environmental project manager for Innovative Health Applications (IHA) at the Kennedy hatchery, said the first nest was received June 26, about 10 days after expert opinions concluded that the relocation was viable and necessary. Eight nests have been received so far, but more than 700 are expected to be relocated by the time the operation closes at the end of hatching season in October.

"We were asked by USFWS and NOAA and we recommitted to support this action through the whole nesting season," Provancha said. "The plan is to move them all because the Gulf is in extremely bad condition."


At this point, the incubation process is producing normal amounts of hatchlings from the nests, Provancha said. "The process of incubation is actually quite simple."

The hard part is any physical movement of the eggs. For instance, the nests cannot be dug up in one scoop by an excavator. Instead, each egg is handled by a trained and authorized official who keeps the egg oriented exactly as it was in its nest. A single nest can hold 100 or more eggs.

The eggs and sand are placed inside Styrofoam containers and brought in the FedEx truck to Kennedy, where they are housed in comfortable darkness and relative quiet in a climate-controlled building. The nests are monitored on a daily basis for temperature and for signs of hatching. Coordination with the Gulf coast biologists on nest arrivals, tracking nest status, and the biologists say releases will be a continual challenge.

After they hatch, the tiny sea turtles, about half the size of an outstretched hand, are carried to different points along a 100-mile stretch of the Atlantic shore and set free. Typically, sea turtles make their way offshore to a developmental habitat where they can eat and grow.

With the first round of releases behind them with positive results, the people involved in the project are learning what works and what can change as they continue to relocate more nests.

"This option I hadn't really thought about, but it does make sense," Provancha said.