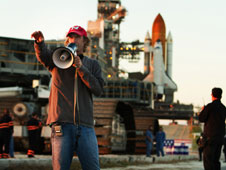 Image above: Michael Bay works at Launch Pad 39A with space shuttle Discovery in the background during filming of "Transformers: Dark of the Moon" while the production team was at NASA's Kennedy Space Center in October 2010. Photo courtesy of Paramount Pictures.
› Larger image

NASA's historic adventures and cutting-edge technology provide some of the underpinnings for "Transformers: Dark of the Moon," and there are also some star turns of a different sort for some of the workers who appeared as extras in the film.

Director Michael Bay and his production team all but moved in to NASA's Kennedy Space Center in Florida for a week in October 2010. There were casting calls, costuming and catering tents, and of course a flotilla of high-performance cars and trucks.

Employees at the center were able to see the outcome of all the effort during a sneak preview of the movie June 28 at the Kennedy Space Center Visitor Complex's IMAX theater.

"I thought they did a great job," said Mike Cianelli, a NASA Test Director (NTD) at Kennedy who appears in the movie. "It was fun to see the production and then to see the end product."

The cast and crew filmed at Launch Pad 39A where Discovery stood ahead of its STS-133 mission, inside the Vehicle Assembly Building (VAB) and an orbiter processing facility and at the Space Station Processing Facility.

Bill Heidtman, also an NTD, said the agency shined in the feature.

"It was kind of an homage to the space program," Heidtman said.

The feature film is the third installment of the Transformers franchise, covering the life-and-death battles of a species of robots that bring their war to Earth.

For Bay, the science fiction elements bring out the most in what audiences go to movies to see.

"The highest grossing films of all time are science fiction movies and things that are in space. I think it's something we still have to discover," Bay said.

"It all looked good," said Ron Feile, lead air traffic controller at the Shuttle Landing Facility, who helped coordinate the setup for the scenes shot there. He was particularly pleased with the role a trio of NASA helicopters played in the film. "That was impressive."

The Shuttle Landing facility's role in the movie was short, but Feile said it was worth the effort.

"It was an interesting endeavor," he said. "We had fun."

The film's leading characters played by Shia LaBeouf, Rosie Huntington-Whitely and Josh Duhamel were on set at Kennedy at different times.

It was easy for them to get excited about real-life space technology during the filming, even though they're acting opposite computer-generated creatures that convert from robots to vehicles and back.

"It's kind of hard to believe that you're standing in front of the shuttle over here, said John Turturro, who plays Agent Simmons. "When you see something for real you kind of have to keep looking at it, walk around."

Kennedy was a natural backdrop for a science fiction story, said Lorenzo di Bonaventura, one of the film's producers.

"The idea of the space program always was how to get in contact with others, so we've brought the 'Transformers' to the shuttle," said di Bonaventura. "The Kennedy Space Center has always been this sort of mythical thing, I think, for me. You imagine it out there and then you come here and you realize how many people are working here and what this kind of endeavor entails."

The production called for dozens of extras who were volunteers from the Kennedy work force. They spent long days on the sets running inside the VAB, working at computers and performing other tasks at the other locations.

"I thought for the time that they were here we had an awful lot of play time in the movie," said Greg Gaddis, an NTD. "Not personally, but definitely the space center."

The 'Transformers' films are a mix of live-action and computer-generated characters based on a cartoon series and toy line. Many of the people who took part in the filming got to relive a bit of their childhood when they played with the metamorphosing robots.

"Being that kid watching the cartoon back in the 80s and being part of it now is just an awesome experience," said Danny Zeno, another NTD who also took part in the filming.

The movie opened nationwide Wednesday and is expected to be a major summer blockbuster.