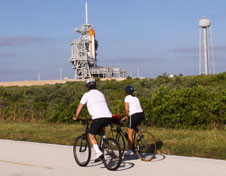 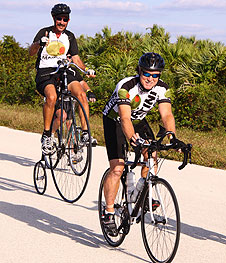 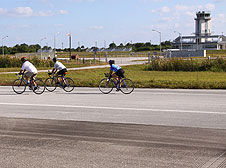 Hundreds of bicyclists mingled with spacecraft Oct. 23 as Kennedy employees, family and guests pedaled around the center for the second Tour de KSC.

Grouped by speed and skill levels, some riders covered all the landmarks Kennedy has to offer, including the Vehicle Assembly Building, both shuttle launch pads and the Shuttle Landing Facility. Plenty of stops along the way offered employees and their guests photo ops with space shuttle Discovery on Launch Pad 39A.

In all, 681 people rode their bikes onto the space center for the event, said Dicksy Hansen, chair of Combined Federal Campaign or CFC.

" We had a range of those employees who haven’t been on a bike for years up to very talented cyclists who cycle passionately," Hansen said. "There were beach cruisers, recumbents, touring, and racing bikes. Some people were dressed in cycling gear and others dressed in regular, every day clothes. There was even an 18th Century style bicycle with a very large rear wheel and small front wheel. This made the event even more diverse and entertaining."

The entry fee for each person included a donation to the CFC and organizers of this year's event were able to contribute $10,215 to the annual fundraising drive. Riders also received a T-shirt.

Center Director Bob Cabana, a former astronaut and avid cyclist, led a group out from the Kennedy Space Center Visitor Complex then up to the VAB.

"I believe that there is a variety of reasons folks come out," Hansen said. "Some because they love cycling and KSC so it is a great day for them when the two come together. Other folks just enjoy coming out to KSC and bringing their guests to view the Center. There aren’t very many opportunities for employees to bring guests on Center. Others wanted to support CFC and contribute by enjoying a few hours cycling around the Center."

Last year's inaugural event also opened the CFC season. This was the second Tour de KSC, but will not be the last, Hansen said. Each event takes considerable planning and Hansen's group already anticipates holding the third event next year.