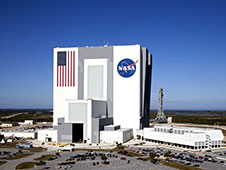 With the recent award of a new processing and launch operations contract, Kennedy Space Center is positioned for the next era of space exploration.

In late December, NASA awarded the Test and Operations Support Contract, or TOSC, to Jacobs Technology Inc. of Tullahoma, Tenn. The contractor will provide overall management and implementation of ground systems capabilities, flight hardware processing and launch operations at Kennedy.

“With the award of this contract, Kennedy Space Center is positioned to be a 21st-century launch facility that will support multiple users,” said Center Director Robert Cabana. “It is an exciting time, as we watch the infrastructure for the next era of space exploration take shape.”

Jacobs will provide services to NASA, including support to the agency’s programs, commercial entities and other government agencies. Services include launch vehicle, spacecraft and payload integration and processing; operations and development of associated processes and ground systems to support integration, processing and launch; servicing and testing of flight hardware; and launch of development and operational flights at Kennedy.

“We are excited to be here at Kennedy,” Allen said. “We are in the phase-in period and will be ready to hit the ground running with a strong leadership team and workforce.”

“They are off to a great start in making sure there will be a seamless transition from the predecessor contracts and that everything will be ready to start full contract performance on March 1,” Kerr said.

Subcontractors working with Jacobs on the contract include Engineering Research and Consulting Inc., of Huntsville, Ala., and Aerodyne Industries LLC, of Oldsmar, Fla.

“The Source Evaluation Board did an outstanding job working this procurement as we transitioned from Exploration Ground Launch Services to the TOSC,” Cabana said.

The contract begins March 1, after a two-month phase-in period that began Jan. 2. The contract has a one-year, seven-month base period and options to extend the work through Sept. 30, 2022.