A Land Over Seas
Sometimes even the best plans change suddenly. Believing it's always good to have options, NASA recently announced a new Transoceanic Abort Landing (TAL) site at Istres Air Base in France, giving NASA three places to land across the Atlantic in case of an emergency during launch. 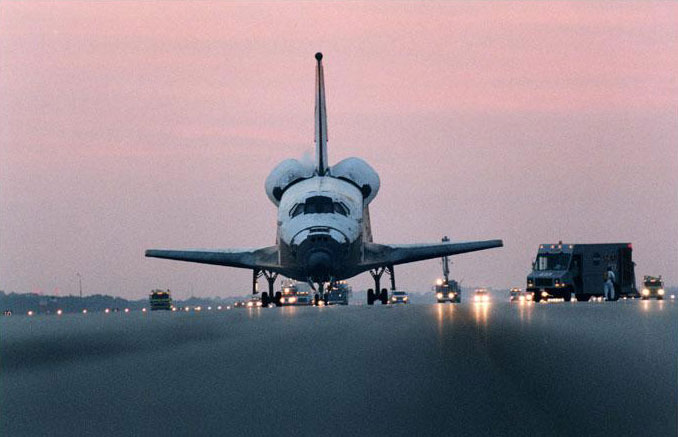 The new site is the result of an agreement signed June 7 between the U.S. and French governments that applies to all future Space Shuttle missions supporting the International Space Station.

The primary TAL site for Space Station missions is in Zaragoza, Spain. If weather is bad in Zaragoza on launch day, the Istres site and a site in Moron, Spain provide alternate landing options.

Dennis Gagen, NASA landing recovery manager, said the three current TAL sites were chosen mostly because of their location near the high inclination launch path. "These are really the better sites as far as being close to the trajectory of the launch," Gagen said.

Shuttle missions for the Station use a high inclination launch, which means they reach higher maximum latitude in their orbit around the Earth as they climb into space. If an emergency landing were necessary, it would be important to have a site near this flight path where the orbiter could abort the launch and land safely. Other factors like runway length and local climate were also considered in choosing the TAL sites.

Landing at a TAL site is a safe way for NASA to call off a Shuttle mission if the orbiter can't reach orbit or turn around and come back to the U.S. While an orbiter has never had to land at a TAL site and the chances of this are very low, it is an important safety measure to have. A TAL would be used if an emergency occurred roughly between two and a half minutes and seven and a half minutes after liftoff.

Image right: Although TAL sites have never been used, landing convoys like these at Kennedy would provide support to the Space Shuttle crew. Image credit: NASA

A lot of preparation goes into making a TAL site ready for launch day. A TAL Support Team arrives at each site a week before the launch. These teams are made up of about 100 people from NASA and the U.S. Department of Defense and perform a number of tasks, such as simulating landing the day before launch, and setting up visual and microwave landing aids, weather equipment and emergency equipment.

TAL sites are vitally important to the Space Shuttle missions, according to Tom Friers, TAL Team manager in Zaragoza.

"It's a peace of mind thing for the crew, but it's also a safety thing," Friers said. "It is that preparation for what you hope never happens."