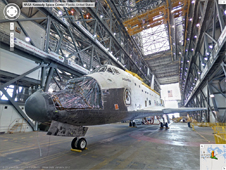 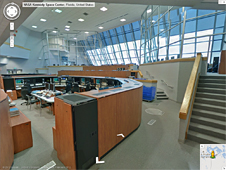 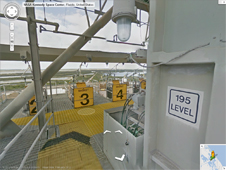 With its seaside location and unique facilities steeped in history, NASA's Kennedy Space Center in Florida boasts amazing views typically seen only by employees and astronauts. Now space enthusiasts around the world can take a virtual walk through the transfer aisle of the cavernous Vehicle Assembly Building, stand at the top of Launch Pad 39A, and more, thanks to a new partnership between Kennedy and Google Maps with Street View.

"We are pleased to partner with Google on the new Street View project, which offers the public a behind-the-scenes look at the Kennedy Space Center's unique facilities that launched humans to the moon and Space Shuttles to low Earth orbit. Viewers also will get a peek inside areas where flight hardware was processed, including elements of the International Space Station, and planetary and scientific payloads," said Lisa Malone, director of KSC Public Affairs.

The collaborative effort offers unprecedented views of Kennedy Space Center at a dynamic time for the spaceport. Kennedy is celebrating its 50th anniversary this year, and continues to transition its facilities and infrastructure from a focus on the Space Shuttle Program, which ended in 2011, to a modern and flexible launch complex.

"The Street View team tries to go to amazing places around the world, because we know that our users love to see them and experience them online," said Ryan Falor, project manager for Google Street View.

"Kennedy Space Center is an obviously amazing location with one-of-a-kind buildings and structures that we knew people would be excited to see. When I started managing the team, I knew that one of my goals was to bring Street View to NASA and I was thrilled when we got a positive response from Kennedy about the project."

Through Google Maps with Street View, users can travel the same route the astronauts traveled from the Operations and Checkout Building to the launch pad; stand inside the Firing Room in the Launch Control Center, the nerve center of Launch Complex 39; walk through the high bay of the Space Station Processing Facility; and visit the Space Shuttle Main Engine shop, among other locations.

"Kennedy Space Center is an obviously amazing location with one-of-a-kind buildings and structures that we knew people would be excited to see."
- Ryan Falor
Project Manager, Google Street View

A crew of five Google Street View personnel spent a week collecting data and imagery at Kennedy in early 2012, while shuttles Atlantis, Endeavour and Discovery all were still at the center as workers prepared them for public display. Atlantis and Endeavour were in the Vehicle Assembly Building at the time the images were shot and are easily seen in the Google Street View tour of that facility.

The Google team used a variety of cameras and tools to acquire 360-degree views of the center's most famous and historic landmarks. Exteriors and streets were photographed using Google Street View cars, while crew members relied on a three-wheeled trike, a wheeled trolley, and a tripod for tight spaces and interiors.

According to Falor, it's hard to narrow down what the Google Street View crew most enjoyed about the visit to Kennedy.

"I know everyone was excited to see the shuttles and go up on the launch tower," he said.

Go to http://maps.google.com/streetview to begin the virtual tour. Visitors also can use Google Maps to navigate to Kennedy Space Center, then switch to Street View for an eye-level look at the spaceport. Note: This collection is best viewed in Firefox and Safari browsers. Certain versions of Internet Explorer are not supported.
Anna Heiney
NASA's John F. Kennedy Space Center
› Back To Top