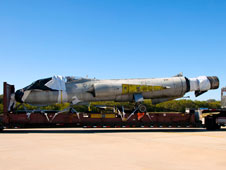 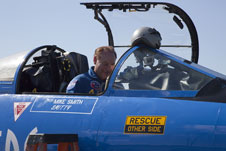 Image above: Starfighters pilot and owner Rick Svetkoff in the cockpit of one of the Starfighters already in service with the company. Photo credit: NASA/Gianni M. Woods
› Larger image 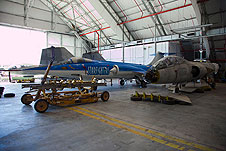 Image above: One of the existing fleet of F-104 Starfighters is joined by the newer, but not yet assembled, jets the company just bought from Italy. Photo credit: NASA/Frankie Martin
› Larger Image 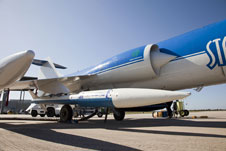 Image above:The StarLab rocket hangs beneath the wing of a Starfighter jet recently during taxi testing. The rocket, about the size of an air-to-air missile, was built by the 4Frontiers company to launch experiments into space. Photo credit: NASA/Gianni M. Woods
› Larger image

The final pieces of a unique squadron of supersonic fighters arrived at NASA's Kennedy Space Center in Florida on Thursday, Jan. 19, where they will be reassembled and put to work with a private company aiming to use them for research and microgravity training.

The new planes were part of a group of five F-104 fighters bought by Starfighters Inc. from the Italian Air Force. The company already had four of the aircraft, but that wasn't enough for the company to pursue a number of different opportunities.

With nine aircraft at his disposal, Starfighters owner Rick Svetkoff said there will always be aircraft available to fly missions for a variety of customers. As importantly, the company will have what it needs to fly two aircraft on a single mission, with one serving as a chase plane to photograph experiments.

"Now we're in a position where we can really start operations," Svetkoff said. "Before, we couldn't do a lot of things we wanted to do."

Starfighters operates out of a hangar at the Shuttle Landing Facility at Kennedy under an agreement with Kennedy. Svetkoff's main goal is to fly research and development missions, ranging from experiments flown for universities to evaluating rocket and spacecraft components in high-stress environments including high-acceleration and microgravity.

Space Florida and Embry-Riddle University already have partnerships with the company.

Because the aircraft can soar to some 70,000 feet and speed past Mach 2, it can be used to launch small satellites into space. The 19-foot-long, 900-pound rocket, about the size of a Sparrow missile, has already been tested in a series of taxi runs hanging from an F-104's wings.

Test flights carrying the rocket but not launching it will be conducted in the next month and the first launch is in works to take place in the summer.

The rocket is meant to take small experiments into space but not into orbit. Instead, the rocket will parachute back to Earth and be recovered from the ocean for reuse. Svetkoff expects to launch about 100 suborbital missions a year from the Starfighters.

In less than a year, though, Svetkoff said he expects to start launching nanosatellites into orbit using a similar approach. After all, an F-104 can match a rocket's launch performance in some areas.

The F-104 Starfighter is a decades-old, supersonic fighter design that was put into service during the Cold War to intercept Soviet aircraft. Known as "the missile with a man in it" because of its high speed and stubby wings, the fighter was developed by Lockheed Martin's Kelly Johnson, the aerospace icon who also developed the SR-71 and U-2 aircraft.

Able to reach a top speed of Mach 2.4 and fly to about 70,000 feet, the F-104 found a second career with NASA in the 1960s. It helped train astronauts for microgravity and to keep their skills up in the demanding world of high-speed flight.

"Anything an F-16 or an F-18 can do, we can do with this aircraft, performance-wise," Svetkoff said.

The Starfighters fleet includes a mix of single-seat versions and two-seaters, each playing specific roles for the company.

Research and development flights are expected to add another 100 missions to the Starfighters' log each year, Svetkoff said.

The experimentation is not expected to end with machinery and experiments, though. As private companies develop their own spacecraft to launch humans into space in partnerships with NASA, some of those companies are already talking about using the Starfighters to train for microgravity and other situations, just as NASA's astronauts did in past decades.

For the moment though, the attention is on getting the new aircraft cleaned and assembled. The engines and other components will be taken apart and cleaned, and then put back together. New avionics packages including digital displays will be added to the new aircraft, too. It will take about three months to complete the first one, but the squadron should be ready in six months.