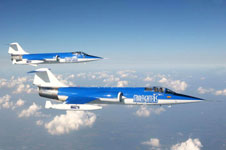 Image above: The F-104 Starfighter is a Mach 2.2 aircraft that was developed as a high-speed interceptor. NASA used it as a research aircraft, a role it is returning to in the hands of Starfighters Inc., which is based at Kennedy Space Center's Shuttle Landing Facility. Photo courtesy of Starfighters Inc.
› Larger image 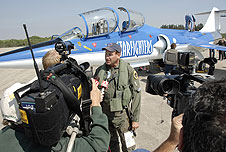 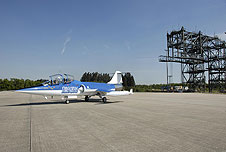 Image above: A Starfighters F-104 sits on the ramp at the Mate-Demate Device at the Shuttle Landing Facility at NASA's Kennedy Space Center in Florida. Photo credit: NASA/Kim Shiflett
› Larger image 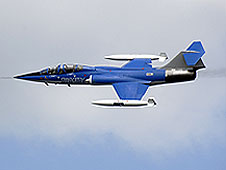 F-104 jet fighters just like the ones astronauts trained in for decades will become a more regular part of the skyscape above NASA's Kennedy Space Center as a private company expands its fleet of jets with plans to conduct more research flights, launch very small satellites into space and even take paying passengers into the stratosphere.

The developments come four years after the company made its first flight from the Shuttle Landing Facility, or SLF, at Kennedy in April 2007.

Starfighters pilot and owner Rick Svetkoff is one of the new generation of entrepreneurs working to open different aspects of the aerospace world to a broader group of developers, researchers and people.

"We're breaking the mold," Svetkoff said recently inside the hangar at the SLF the company leased from Space Florida.

Boasting speeds faster than Mach 2, extreme acceleration and the ability to pull 7 g's or more, the F-104 provides a platform to test rocket components, tracking sensors and space-bound equipment, Svetkoff said. The aircraft also can push over to create microgravity conditions for a short time.

"We can go from ground to 23,000 feet as fast as some of the rockets launched here," Svetkoff said.

"High altitude and high speed is the key," Svetkoff said.

Svetkoff's company worked for years showing off the aircraft in air shows, where the F-104's would tear through the air over dazzled crowds. In the last four years, the company has flown microgravity experiments, spacecraft parts and a digital camera to make sure it could withstand launch conditions. For example, Space Florida and the Florida Space Grant Consortium have flown payloads using Starfighters.

There are four planes in the hangar now, three operational and one used mostly for parts. Built in the 1960s, they are sharp, sleek birds that evoke speed even at rest. But parts are hard to find, which is why Svetkoff bought five of the latest model Starfighters from Italy. With those F-104 models, the company gains long-term stability, Svetkoff said.

Researchers are developing projects using the F-104 to try out everything from space traffic control to human reactions to different physical conditions to launching satellites on quick trips into space.

"There's a lot of things that we can do out here," said Eddie Ellegood, director of Aerospace Development and a space policy analyst at Embry-Riddle Aeronauical University in Daytona Beach, Fla.

A 19-foot-long, 900-pound rocket about the size of a Sparrow missile has been developed to launch nanosatellites from a Starfighter. The concept requires the plane to fly to around 60,000 feet, about twice as high as most airliners cruise.

"That means we have to have pressure suits," Svetkoff said. "The U-2 and the F-104 used the same cockpit systems, so we can use those pressure suits in our aircraft."

Svetkoff said the aircraft design has been extensively tested through decades of flights by test pilots and astronauts, so the launch profile is not particularly risky.

Performing these new duties has meant working closely with NASA and the Federal Aviation Administration to fit within the guidelines the agencies have devised in categories that are being adapted to civilian standards. There also are different standards of success for a company than there is for NASA or another agency.

"We have to make money, NASA is making history," Svetkoff said.

Plainly, no one expected high-performance fighters to ever be in the hands of civilian companies, Svetkoff said.

The company is the only civilian operator in the world of the F-104 Starfighter, a fighter jet capable of Mach 2.2 and able to soar to about 100,000 feet. Svetkoff's fleet comes from overseas, acquired from air forces in Norway and Italy that stopped using the planes.

Designed by the legendary Kelly Johnson, the man behind the SR-71, the Starfighter was the first U.S. jet fighter to fly twice the speed of sound, a record it set in 1954. Because of its huge 11,000-pound thrust engine and stubby, seven-foot-long wings, the aircraft was known as the "missile with a man in it."

NASA used the F-104 through the 1990s as a research aircraft and chase plane. Astronauts including Neil Armstrong flew the aircraft and one of NASA's retired Starfighters hangs in the National Air and Space Museum.