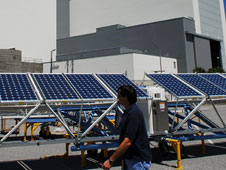 The prototype solar power generator was deployed recently near the Vehicle Assembly Building at NASA's Kennedy Space Center in Florida. Photo credit: NASA/Jim Grossmann
› Larger image
Some of the same technology that let walkways stretch over space shuttles in their processing hangars has the potential to bring electricity to a stricken area after engineers at NASA's Kennedy Space Center developed a portable truss that deploys solar panels which generate 5 kilowatts of peak power.

Strong enough to power a small house without air conditioning, the portable generators can make electricity as long as the sun shines on their blue-black solar cells. The prototype has a bank of batteries to store energy for short periods of no sun. A larger battery bank or backup conventional generator could be used to cover longer sunless periods.

"The portable solar generator would allow us to take advantage of the several days of clear weather you get after a hurricane comes through an area," said Jim Fletcher, a former staff engineer with United Space Alliance (USA). "The concept's based on the fact that you would pre-position it."

The truss demonstrator was unfurled recently in the Vehicle Assembly Building parking lot, where it drew a steady line of visitors. At 45-feet long, the prototype has a central area for electronics and the like with trusses extending out on each side. A second unit has solar panels and a battery bank.

While the solar cells convert the sunlight into electricity, Fletcher said the truss is the unique aspect of the project because it enables large solar arrays to be deployed from relatively small trailers. Each of the four 21-foot-long trusses, with 7 panels nestled inside, retracts into a 17.5-inch space. That kind of flexibility reduces the number of people needed to make it operational and also minimizes the impact of bringing it into a damaged area.

"It is novel technology," Fletcher said. "I don't know of any other trusses that do what this does."

The idea is getting a lot of attention from emergency planners for several reasons, particularly because the generator doesn't have to be refueled every few hours. The energy is basically free from the sun.

"I can see this evolving to a very popular means because it's cheap," said Wayne Kee, chief of Kennedy's Emergency Management Office. "To see it in a portable configuration, that was one of those 'Aha!' moments. It could potentially provide power to light up an area for rescue of victims, provide power to cook meals, power a medical triage area and operate computers and other electronic equipment. Plus it is portable and can be taken virtually anywhere."

The prototype took about 18 months to build because work was lower priority than shuttle processing. The solar panels were paid for with energy rebates from FPL as a result of energy savings efforts at KSC.

NASA owns the prototype and Kee said it could be tested in a variety of situations at Kennedy, although he will not depend on it for this hurricane season because it is still in prototype phase. The prototype is slated to be used at the USA generator shop at Kennedy where it will stand unfurled to provide solar power to the facility.

The project comes at a time of energy innovation at Kennedy. The center recently opened two solar farms that are creating electricity. Also, some of the same companies that have readied the space shuttle fleet for flight are considering the feasibility of a Kennedy SpacEnergy Center that would be a hub of innovation using space workers to engineer and develop alternative energy solutions in addition to their conventional space-related duties.

The solar power generator project is a bit of a natural fit for Kennedy because extendible solar arrays are common on the many spacecraft that technicians process at the center. For the truss design, though, Fletcher looked to an extendible design used on the ground. USA and a Tennessee company, Merrifield Engineering, Inc., developed a deployable truss mechanism to provide access over a shuttle payload bay inside an orbiter processing facility.

"This truss is a cousin to that," Fletcher said.

With enough interest, Fletcher said the generators could be mass-produced near Kennedy and then sold to emergency management agencies, relief organizations or other customers. In the meantime, though, the NASA/USA Launch Equipment Shop that built the first prototype needs another few weeks to complete it. Another three or four are needed to test it's electrical functionality after that, Fletcher estimated.

"It's designed to be functional nearly 100 percent of the time," Fletcher said.

For instance, Fletcher said they could be plugged into a school that is used as a storm shelter. On most days, the generator would provide 40 kilowatt-hours of energy, or more, to the school. The generator can be folded up as storm nears, then re-opened after the storm is gone, providing perhaps the only source of electricity to the shelter.

With upgraded solar panels already on the market and the ability to add several more feet to the truss, Fletcher said a generator could produce twice as much peak power, 10 kilowatts.

"I can see us building another prototype or two," Fletcher said about the next step for the concept. "And then hopefully it will be commercially manufactured, since it lends itself to mass production."