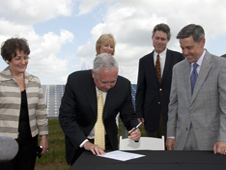 Center Director Bob Cabana joined FPL President and CEO Armando Olivera to officially commission the solar energy center April 8. The energy center is the result of a public-private partnership between NASA and FPL.

"NASA is a pioneer in the use of solar power for space exploration, so it's fitting that we're working with FPL to expand the use of that renewable energy source at Kennedy, where many of those missions were launched," Cabana said. "This type of commercial partnership with NASA helps provide Florida residents, and America's space program, with new sources of green power that reduce our reliance on fossil fuels and improve the environment."

Olivera said that like NASA, FPL is looking beyond the horizon.

"Nearly 50 years ago, NASA's Kennedy Space Center was born of a dream to enable humankind to explore the mysteries of space. Today, we gather on the same ground to celebrate the birth of a new dream: a clean energy future for Florida built on renewable energy from the sun," Olivera said.

"FPL's Space Coast Next Generation Solar Energy Center is an important part of our state's clean-energy future, but large-scale solar projects like this one also have a very positive impact on the economy today," Olivera added. 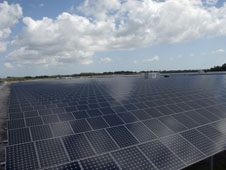 Image: As far as the eye can see is a farm of solar panels off of State Road 3 at NASA's Kennedy Space Center in Florida. Photo credit: NASA/Jim Grossmann
› Larger image

The new solar photovoltaic power facility was designed and built by SunPower Corp., using panels that are the most efficient available. The 35,000 solar panel facility, occupying 60 acres on NASA property at Kennedy, is producing 10 megawatts of clean, emissions-free power, which is enough energy to serve about 1,100 homes.

The solar facility is expected to reduce carbon dioxide emissions by more than 227,000 tons throughout the life of the project, which is equivalent to removing 1,800 cars from the road each year, according to the U.S. Environmental Protection Agency.

U.S. Rep. Suzanne Kosmas said that Florida is poised to be a leader in America's growing clean-energy economy, which naturally includes solar power. "This joint effort between NASA and FPL is an example of how we can create jobs while investing in common-sense solutions to the economic, environmental and national security challenges we face today," Kosmas said.

Olivera said when combined with the other solar plants that FPL is building, it will make Florida No. 2 in the nation for solar power.