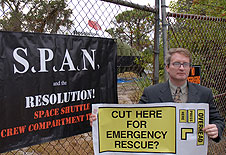 Image above: Chuck Ryan stands in front of the space shuttle crew compartment replica he built when he was going to school in California. The replica now stands near Kennedy Space Center. Photo credit: NASA/Steve Siceloff 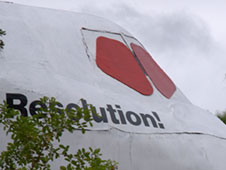 Image above: The space shuttle replica "Resolution" includes a full-sized flight deck, middeck and nose section. Ryan says the cockpit includes a thousand toggle switches and other control features like those used on the real spacecraft. Photo credit: NASA/Steve Siceloff 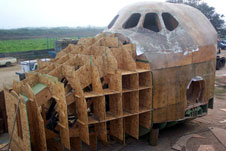 Image above: "Resolution" as it was being built in Santa Maria, Calif. Photo courtesy of Chuck Ryan.
›  View Larger Image

Chuck Ryan's story of a space shuttle trainer called "Resolution" is one of time and timing.

Ryan began building a full-scale mock-up of the shuttle's crew compartment some 15 years ago when he was still an engineering student at the California Polytechnic State University, Cal-Poly.

The attention to detail is obvious: on the outside, careful layering of fiberglass displays the rounded aerodynamic features of a real shuttle. On the inside, Ryan said, the cockpit was complete down to the thousandth toggle switch.

"I was one of those children of Apollo," Ryan said. "I was very interested in NASA my whole life."

Ryan said he gave his first NASA-focused presentation in fourth grade. He got a scuba diving license at age 13 and started learning to fly airplanes when he was 15, though his parents didn't know about it.

"I was actually flying over my house without them even knowing it," Ryan said.

Since the space agency has certain restrictions against self-promotion, Ryan formed a student group to advertise NASA's goals and missions. Part of the work included building a shuttle flight deck into a flight simulator so people could pretend to fly a shuttle.

Working on their own time with donated wood, steel and other materials, the group of about 10 students decided to add a middeck and mount the flight deck to the top of it. Eventually, they added a mock-up of the 60-foot-long cargo bay.

Ryan explains: "It all started with a phrase that should never be uttered: 'How hard can it be?' "

It was far from a smooth construction process, though. At one point, the flight deck fell from a crane and shattered on impact.

"I thought that was it," Ryan said.

Ryan and his small band regrouped to rebuild the flight deck. But the large mock-up had to be moved from its construction site on campus. The students found a home for it 30 miles away on a strawberry farm.

He finished it there and it weighed about 15 tons at that point. But then it had to be moved again to make way for a housing development. By this time, though, the real shuttle program had a retirement date.

Saying he was asked by NASA to configure the mock-up as a trainer for firefighters to practice with, Ryan packed the shuttle for shipment by train to NASA's Kennedy Space Center in Florida, more than 2,000 miles away.

It rolled into the rail yard near the Vehicle Assembly Building the day after space shuttle Discovery’s Return to Flight mission, STS-114, launched in 2005.

"For one brief moment, the Resolution was part of the fleet," Ryan said.

After a couple days in the rail yard, the mock-up was on the move again, this time stopping at a part of land where Ryan reassembled it while trying to determine its future.

He even rode out Tropical Storm Fay inside the mock-up in August 2008 and sought shelter inside it during a tornado warning.

The shuttle nose section moved once more to a small parcel of land just outside Kennedy's south gate where drivers can see it easily as they head to and from the center.

After Ryan approached NASA this spring saying his project was almost complete, Kennedy fire safety, engineering and center operations personnel began a thorough review for possible uses for the mock-up. But following the evaluation, NASA management determined Kennedy had the right resources to safely train crews and safety professionals through the end of Space Shuttle Program and there wasn’t a need for an additional shuttle trainer with the fleet’s retirement less than a year away.

Ryan doesn't know what the future holds for his would-be trainer, but his own plans include resuming his schooling and achieving closure for a project that has consumed much of his adult life.

Looking back on the effort, Ryan said the project showed how deeply the promise of space exploration can take hold.

"It's a testament to the love of manned spaceflight," Ryan said.